Update Required To play the media you will need to either update your browser to a recent version or update your Flash plugin.
By Bryan Lynn
08 May, 2019


Google has announced new privacy tools designed to help protect personal data. It has also launched a much lower-cost Pixel phone. The announcements came on the first day of Google's I/O 2019 conference in Mountain View, California.

Google officials said the new privacy tools would be added to many of the company's products.

The changes come after Google and other major technology companies have faced repeated calls from privacy groups and lawmakers to take measures to protect user data.

Google CEO Sundar Pichai opened the conference by noting that Google was seeking to keep up with "evolving user expectations" on privacy.

One privacy change will extend Google's existing "incognito mode" to its Google Maps and Google search apps later this year. The company says that, when activated, incognito blocks user searches or movements from being stored by Google. Incognito mode has been available in Google Chrome and YouTube for quite some time. 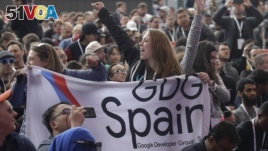 Attendees cheer while waiting for the keynote address of the Google I/O conference in Mountain View, Calif., Tuesday, May 7, 2019. (AP Photo/Jeff Chiu)

Android product director Stephanie Cutherbertson said at the conference that the release of Android Q is aimed at protecting "security and privacy." She said location data recorded by mobile apps is "some of your most personal information."

Google has been criticized in the past for making it difficult for users to block location tracking. In 2018, an Associated Press investigation found that Google continued storing location data even when users turned off a "location history" setting on Android phones.

The company launched a new website to explain how sensors used with these systems activate video and audio recording.

Google says users now have the ability to listen to any recordings the systems make and to clear them at any time. The company also said it would not use video footage, audio recordings or other sensor readings to target users with advertisements.

After the announcements, some critics said they still do not think Google is doing enough in efforts to protect user privacy. They noted that the company makes billions of dollars each year by selling ads targeted at the interests users show through their search requests and data collected by Google apps and services.

"They're sort of marginal improvements," said Jeremy Tillman, head of Ghostery, a company that makes internet ad-blocking products. "They are not bad, but they almost seem like they're designed to give the company a better messaging push instead of making wholesale improvements to user privacy."

Marc Rotenberg is president of the Electronic Privacy Information Center. He said he believes Google's privacy measures are too weak. "Unless the Federal Trade Commission is prepared to bring enforcement actions against companies, these promises to protect privacy matter very little," Rotenberg said.

Also at the conference, Google announced the launch of its lowest-priced smartphone yet – the Pixel 3a. The phone comes in two sizes, with the smaller one priced at $399. The previous version of the device, the Pixel 3, sells for $799.

The company also announced new features for its machine learning-powered Google Assistant. In the coming months, the Assistant will gain the ability to complete a series of steps to carry out some internet processes on its own.

In a demonstration, Assistant was able to fully complete entire travel bookings and buy movie tickets by itself. A similar Android system received a lot of attention at last year's conference when it used a machine-generated voice to set a haircut appointment on its own.

Bryan Lynn wrote this story for VOA Learning English based on reports from Google, the Associated Press and Reuters. Ashley Thompson was the editor.

evolve – v. to develop or make something develop

app – n. a computer program that can be put onto a mobile phone or some other electronic device

track – v. to follow the track or traces of something

marginal – adj. small and not important