Scientists Restore Some Activity in Brains from Dead Pigs

Update Required To play the media you will need to either update your browser to a recent version or update your Flash plugin.
By Hai Do
19 April, 2019


Scientists say that the brains of animals and humans risk severe damage without blood flow and oxygen. But, researchers say they were able to restore some activity in the brains of pigs that had been killed four hours earlier.

Nenad Sestan of the Yale School of Medicine in New Haven, Connecticut was one of the researchers. He said, by medical definitions, the brains were not "living brain(s)." He added that the brains could not think or sense anything.

The researchers, however, found that cells within brains that have lost their supply of blood and oxygen could survive longer than scientists had believed.

They said the research might lead to new medical treatments for stroke and other conditions. It also provides a new way to study the brain and how drugs work in it.

The research was supported mostly by the National Institutes of Health and published this week in the journal Nature. 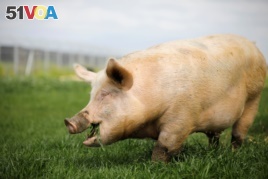 A pig named Yossi, grazes at "Freedom Farm" in Moshav Olesh, Israel March 7, 2019. Yale scientists looking to enhance brain study, were able to restore basic cellular activity in the brains of pigs hours after their death.

The 32 brains in the study came from pigs that had been killed for food. The scientists put the brains into a device in their lab. Four hours after the animals died, they began pumping a specially designed blood substitute through the organs.

After six hours, scientists found that individual brain cells in one area of the brain had continued to keep important details of their structure. And when they sent electric signals to the brains, the cells responded in a way that showed viability.

The scientists studied the artificial blood before and after it entered the treated brains. They found the brain cells were absorbing blood sugar and oxygen and producing carbon dioxide: a signal that they were working. They also found that blood pathways in treated brains reacted to a drug that makes them wider.

But, the brains did not show large amounts of activity that would be a sign of consciousness. The scientists said restoring consciousness was not the goal of the study. And they do not know whether it is possible.

The scientists said they had no plans to try their methods on human brains at this time. However, they are now looking to keep the study for longer than six hours of treatment.

Christof Koch is president of the Allen Institute for Brain Science in Seattle, Washington. He did not take part in the study, but he said he was surprised by the results, especially since they came from such a large animal.

He said the study could increase our knowledge "to bring people back to the land of the living" after a drug overdose. He suggested it also could help with treatments for when the brain has not received enough oxygen for an hour or two.

Koch said the results of the study also raised questions about the widely used definition of death – the irreversible loss of brain activity.

Hai Do adapted this story for VOA Learning English based on an AP report. Mario Ritter was the editor.

restore –v. to return something to its earlier condition

viability –n. able to live or develop into a living thing

artificial –adj. not natural, made by people

absorb –v. to take in something such as a liquid

consciousness –n. the state of being awake and aware