Update Required To play the media you will need to either update your browser to a recent version or update your Flash plugin.
By Bryan Lynn
17 April, 2019


The world's biggest airplane has made its first successful test flight in the United States.

The company said the flight lasted two-and-a-half hours. Officials reported the plane reached a top speed of 304 kilometers per hour and reached a height of more than 5,100 meters. Stratolaunch has the largest wingspan of any aircraft in the world. It measures 117 meters from one end to the other. 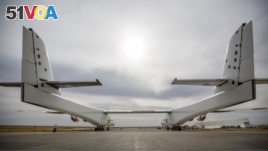 The Stratolaunch has the largest wingspan of any aircraft ever built, 117 meters. (Stratolaunch Systems)

Jean Floyd, the CEO of Stratolaunch Systems, said in a statement the aircraft made "a fantastic first flight" and landed with no problems.

Test pilot Evan Thomas also reported a successful test during a briefing with reporters. "The flight itself was smooth, which is exactly what you want the first flight to be. And for the most part, the airplane flew as predicted, which is again exactly what we want."

Stratolaunch was designed as a new way to launch satellites into low-Earth orbit. It was built to take off with a total weight of nearly 600,000 kilograms. To support its size and weight, Stratolaunch has 28 wheels. It is powered by six engines made for Boeing 747 aircraft.

Stratolaunch Systems was launched by Microsoft co-founder Paul Allen in 2011 with the goal of building aircraft to send rockets into space. The company entered a partnership with Scaled Composites to develop and build the new aircraft.

CEO Jean Floyd spoke about Allen during the briefing with reporters. "It was an emotional moment for me to personally watch this majestic bird take flight and to see Paul Allen's dream come to life in front of my very eyes."

He added: "I had imagined this moment for years, but I'd never imagined the experience without Paul standing next to me." Floyd said that as Stratolaunch lifted off, he did "whisper a ‘thank you' to Paul" for permitting him to be a part of the project.

The satellite-carrying launch vehicles are to be connected to the bottom of the plane. Once Stratolaunch reaches a height of about 10,000 meters, the rockets would be released, and then "air launched" to space.

Stratolaunch Systems said the plane's airport-style launch system and ability to launch rockets over and over again will greatly reduce costs for satellite companies. The plane will also cut wait times between launches and is able to avoid bad weather areas, the company said.

The business model aims to profit from predicted higher demand for satellite launches in the coming years. Stratolaunch plans to compete with other companies offering similar services. These include U.S.-based SpaceX and United Launch Alliance - a partnership between Boeing and Lockheed Martin.

While Stratolaunch calls its aircraft the world's largest, other planes are longer from front to back. These include the Soviet-designed Antonov AN 225 cargo plane, which is 84 meters long, and the Boeing 747-8, which is more than 76.3 meters in length.

Bryan Lynn wrote this story for VOA Learning English, based on reports from the Associated Press, Reuters and Stratolaunch. Hai Do was the editor.

majestic – adj. very beautiful or powerful in a way that people admire

whisper – v. to speak extremely quietly so that other people cannot hear

cargo – n. goods that are carried in a ground or air vehicle