Update Required To play the media you will need to either update your browser to a recent version or update your Flash plugin.
By VOA
21 April, 2019


Israeli researchers say they have created the world's first three-dimensional ,or 3D-printed heart using a patient's own cells.

The researchers, from Tel Aviv University, recently announced the experiment and showed off the new 3D printed heart. Their findings were published in the journal Advanced Science. They described the experiment as "a major medical breakthrough."

The lead researcher on the project was university professor Tal Dvir. He said in a statement that it was the first time that human cells had been used with 3D printing technology to successfully create a whole heart. Dvir added that the "printed" heart contains blood vessels which are needed to pump blood.

Until recently, scientists working on medical methods combining biology and technology were only successful in 3D printing "simple tissues without blood vessels," the research team said. 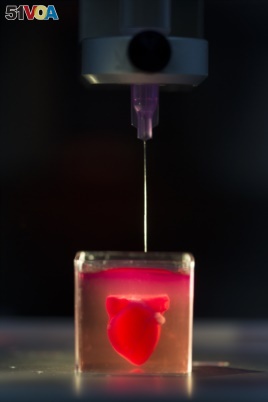 A 3D printer prints a heart with human tissue during a presentation at the University of Tel Aviv, in Tel Aviv, Israel, Monday, April 15, 2019. (AP Photo/Oded Balilty)

The engineered heart introduced by the Israeli team was not big enough to be transplanted into a human. "At this stage, our 3D heart is small, the size of a rabbit's heart," Dvir explained. "But larger human hearts require the same technology."

The development marks a step forward for 3D printing in the medical field. The technology has already expanded into many industries and has been developed to produce devices like guns, cars and homes.

The researchers wrote that they took samples of fatty tissue from patients. This material was then used to develop "ink" for the 3D printing process. First, the researchers created patches of tissue from the patient's own cells. Later, they used that same process to create a small version of a whole heart.

Dvir says using the patient's own cells is important to reduce the risk that the body's system to fight infection will reject a transplanted organ.

Dvir says that the newly-created heart represents great progress. However, more research and development is needed to produce a fully operating, transplantable organ. For example, he said the heart cells will need to fully form parts that can work together to effectively pump blood.

One of the biggest challenges for the engineering team will be finding a way to create a human-sized heart.

Dvir said his team plans to transplant heart models designed for animals, possibly within the next year. He added that, for human use, "simpler organs" will likely be produced before hearts.

"Maybe, in ten years, there will be organ printers in the finest hospitals around the world," Dvir said. He added that he hopes such methods will be used "routinely" to produce organs in the future.

In 2017, the Israeli health ministry formed a group to examine the issues related to the use of 3D printing technology in the medical field, Israel's newspaper Haaretz reported.

One of the group's members was Samer Srouji, who works at Galilee Medical Center in the coastal city of Nahariya. He told the newspaper that while 3D printing in medicine offers great promise, it can also present problems.

"There were also cases that ended up with complications, causing infection and harm to the patient," he said. "This area requires regulation, with protocols and clear guidelines in place," he added.

Bryan Lynn wrote this story for VOA Learning English, based on reports from the Tel Aviv University, Agence France-Presse and Haaretz online. Mario Ritter was the editor.

What are your thoughts on the use of such technology to improve medicine? Write to us in the Comments section, and visit 51VOA.COM.

three-dimensional – adj. having or seeming to have length, width, depth

vessel – n. small tube that carries blood through the body

transplant – v. operation in which a new organ is put into someone's body

patch – n. piece of material use to repair damaged parts of something

complication – n. a new medical problem that develops when someone is being treated for an illness

regulation – n. an official rule that controls how something is done

protocol – n. rules about what you must do and how you must behave in official situations