Update Required To play the media you will need to either update your browser to a recent version or update your Flash plugin.
By Bryan Lynn
28 April, 2019


We sometimes hear news reports warning of asteroids passing close to Earth, with the possibility for disastrous results if there was a direct hit.

But most experts agree there is only a small likelihood that a large asteroid or other space object will crash into Earth and cause great destruction.

Many organizations do recognize the real risk of such an event. One example is NASA, the United States government's space agency. NASA and its international partners continuously search the skies for what scientists call near-Earth objects (NEOs). Such objects include asteroids and comets that come within 50 million kilometers of Earth's orbit.

This week, NASA is teaming up with the U.S. Federal Emergency Management Agency (FEMA) and international experts to study the possibility of a NEO hitting Earth. At a conference near Washington, D.C., scientists will simulate a made-up asteroid to explore what might happen when defending against a real-life hit.

What is an asteroid?

An asteroid is a rocky, airless object. Asteroids are sometimes called minor planets. They are left over from the early formation of our solar system about 4.6 million years ago. Most asteroids can be found orbiting the Sun between the planets Mars and Jupiter. NASA reports that, in all, scientists have identified more than 795,000 asteroids. 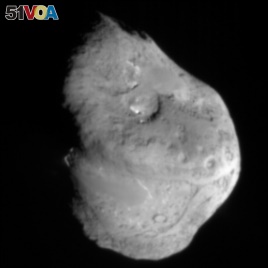 A comet is a small, at times active object that contains ice. In sunlight, the ice can vaporize to form an atmosphere of dust and gas.

NASA reports that about once a year, an asteroid about the size of an automobile enters Earth's atmosphere. Such objects turn into a fireball and burn up before reaching Earth's surface.

About every 2,000 years, a much larger object strikes the Earth and causes major damage. However, NASA experts say an object large enough to threaten Earth's civilization only comes along once every few million years.

The gathering this week – from April 29 to May 3 - is called the Planetary Defense Conference. Attendees from NASA, FEMA and other government agencies and experts from around the world will take part in a simulated test exercise.

The "tabletop exercise" will consider a false threat from an asteroid invented by NASA's Jet Propulsion Laboratory (JPL). Groups will explore possible emergency and defensive measures to deal with the manmade asteroid threat.

Lindley Johnson is a planetary defense officer for NASA. He said the exercise will be a chance to create better international preparation and response processes in case of a real threat. "This ... will help us develop more effective communications with each other and with our governments," he added.

The exercise is based on the made-up discovery of a NEO, one that conference organizers say is set to hit Earth in 2027. The exercise estimates a 1-in-100 chance of the NEO striking the planet.

NASA officials say the international community has decided that in real life, a 1-in-100 chance would be great enough to consider taking defensive and emergency measures.

Organizers noted in a press release that a real-life asteroid is set to pass close to the Earth in 2029. This asteroid, called Apophis, is one of the most important NEOs ever discovered.

NASA predicts Apophis will pass by Earth on Friday, April 13, 2029, within 31,300 kilometers above Earth's surface. That is closer than where weather satellites orbit our planet.

Apophis is estimated to be around 340 meters long from end to end. Experts say if such an asteroid were to hit Earth, it would cause major damage to the planet's surface and our civilization.

But NASA has clearly stated it does not believe that Apophis will hit Earth in 2029. However, the close flyby will provide a great chance for scientists to study the asteroid, NASA says.

In the future, the world community could also decide to send a spacecraft to observe Apophis, the press release said.

Bryan Lynn wrote this story for VOA Learning English based on reports from NASA and the International Academy of Astronautics. George Grow was the editor.

simulate – v. create something that behaves or looks like something real but is not

vaporize – v. to turn from a solid or liquid into a gas