Update Required To play the media you will need to either update your browser to a recent version or update your Flash plugin.
By Bryan Lynn
15 January 2022


A group of fact-checking organizations has called on YouTube to do more to fight misinformation on the video service.

More than 80 organizations worldwide published an open letter to YouTube chief Susan Wojcicki. In it, they accused YouTube of being "one of the major conduits of online disinformation and misinformation worldwide." YouTube is owned by Alphabet Inc., the parent company of Google. 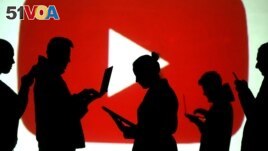 In this file photo, silhouettes of laptop and mobile device users are seen next to a screen projection of the YouTube logo in this picture illustration taken March 28, 2018. (REUTERS/Dado Ruvic/Illustration/File Photo)

The groups said YouTube's leadership could do much more to reduce the spread of false information. "What we do not see is much effort by YouTube to implement policies that address the problem," the letter states.

By not taking effective action, the video service is permitting itself "to be weaponized" by individuals seeking to "manipulate and exploit" others, the letter adds.

The fact-checking organizations offered to assist YouTube in fighting against the publication of false information. They said they are especially equipped to help because of their experience with fact-checking news stories and fighting misinformation around the world. They are all members of the International Fact Checking Network.

The letter said the problem is especially difficult in non-English speaking nations and in the southern half of the world.

The groups urged YouTube to center on providing context and fact-checked information that can clearly be seen on videos. They also called on YouTube to act against repeat violators and to strengthen efforts to fight misinformation in languages other than English.

In a statement, YouTube spokesperson Elena Hernandez defended the company's policies. She said YouTube spends a lot on such efforts around the world and seeks to connect people to "authoritative content."

Hernandez called fact-checking an important tool "to help viewers make their own informed decisions" about what they are watching. But she added that such efforts are just "one piece of a much larger puzzle" that seeks to limit the spread of misinformation.

The Associated Press and Agence France-Presse reported on this story. Bryan Lynn adapted the reports for VOA Learning English.

check – v. to examine something in order to make sure that it is correct or the way it should be

conduit – n. a way of connecting two places or things

implement – v. put something into action

manipulate – v. control something or someone to your advantage, often unfairly or dishonestly

authoritative –adj. having or showing impressive knowledge about a subject

puzzle – n. a game in which you arrange separate pieces together in a way that makes them all fit together