Update Required To play the media you will need to either update your browser to a recent version or update your Flash plugin.
By Ashley Thompson
06 January 2022


For most of his life, Li Jingwei did not know his birth name. He did not know where he was born, or even his exact birthday.

That changed last month when he found his biological family with the help of a map.

Li was a victim of child trafficking. In 1989, when he was four years old, a neighbor told him that he would take him to look at cars. Cars were rare in the rural Chinese village where Li's family lived. 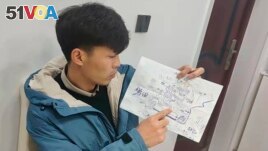 Li Jingwei points to a detail a map he drew from memory of his childhood village as he sits in Lankao in central China's Henan Province, Jan. 5, 2022. Abducted by child traffickers when he was 4 years old, Li was able to find his mother some 30 years later. (Li Jingwei via AP)

That was the last time he saw his home, Li said. The neighbor took him behind a hill to a road where three bicycles and four other kidnappers were waiting. He cried, but they put him on a bicycle and rode away.

"I wanted to go home but they didn't allow that," Li recently told reporters with The Associated Press. "Two hours later, I knew I wouldn't be going back home and I must have met bad people."

He remembers being taken on a train. Later he was sold to a family in another province in China, Henan.

"Because I was too young, only 4, and I hadn't gone to school yet, I couldn't remember anything, including the names" of his parents and hometown, he said.

He still had strong memories, however, of his village and its surroundings in Yunnan province. He remembers the mountains, bamboo forests and a small body of water next to his home. He used to play in those places. After he was kidnapped, Li drew maps of his village every day until he was 13. He did this so that he would not forget such details.

Before he started school, he would draw the maps on the ground. After entering school, he drew them in his notebooks. For him, drawing the maps became an obsession – something he spent an extraordinary amount of time doing and thinking about.

More than 30 years after Li was taken, one of his detailed maps helped police find his village – and his family.

Li decided to speak with his adoptive parents to get more information. He also looked at DNA databases. But he found nothing helpful. Then, volunteers suggested that he publish a video of himself on Douyin, a social media service, along with a map he drew from memory.

It took him only 10 minutes to redraw what he had drawn hundreds or even thousands of times as a child, he said.

Li's post on Douyin was seen tens of thousands of times. By then, Li said police had already narrowed down possible villages based on his DNA sample. His hand-drawn map helped villagers identify a family.

Li finally connected with his mother over the telephone. She asked about a scar on his chin. She explained the mark was caused by a fall from a ladder. "When she mentioned the scar, I knew it was her," Li said.

Other details and memories fell into place, and a DNA test confirmed Li had found his family. In an emotional reunion on New Year's Day, he saw his mother for the first time since he was four.

As Li walked toward her, he collapsed on the ground in emotion. Lifted up by his younger brother and sister, he finally hugged his mother.

Li began to cry when speaking about his father, who is no longer alive. Li, who has two children of his own, said he will take his family to visit the place where his father is buried. He plans to go there with all his aunts and uncles during Lunar New Year celebrations next month.

"It's going to be a real big reunion," he said. "I want to tell him that his son is back."

bicycle –n. a two-wheeled vehicle that a person rides by pushing on foot pedals

province –n. one of the large parts that some countries are divided into

draw –v. to create a picture by using a pencil, pen or similar instrument to make lines

regularly –adv. very often; at about the same time each day or month

adoptive –adj. used to describe a parent who has adopted a child, taking the child as their own

scar –n. the mark left after a wound has healed

mention –v. to talk about or note in some way especially in a brief way

hug –v. to put your arms around someone especially as a way of showing love or friendship