Garlic: The Key to a Long Life?

Update Required To play the media you will need to either update your browser to a recent version or update your Flash plugin.
By Anna Matteo
12 December, 2016

Garlic is one of the most common cooking ingredients around the world. Many dishes in Europe, Africa, Asia and the Americas use this strong-flavored vegetable.

Garlic is similar to other bulb-shaped plants, including onions, chives, leeks and scallions. But garlic is special. For centuries, people have used garlic not only for cooking, but also for medicine. 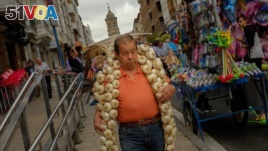 A man carries a strip of garlic during the garlic fair in Vitoria, northern Spain, July 2016. (AP Photo/Alvaro Barrientos)

Researchers at the Memorial Sloan-Kettering Cancer Center and Cornell University studied the medicinal use of garlic throughout history. They found references to garlic in ancient texts from Egypt, Greece, Rome, China and India.

For example, in ancient Greece and Rome, people considered garlic an aid to strength and endurance.

The original Olympic athletes in Greece ate garlic to improve their performance. The ancient Romans fed garlic to the soldiers and sailors.

Workers who built the pyramids in Egypt ate garlic. In fact, this is a theme throughout early history -- workers eating garlic to increase their strength.

But why is garlic such a healthy food?

The short answer is that garlic creates a gas called hydrogen sulfide.

At first, hydrogen sulfide does not seem very healthy. In fact, it is toxic and flammable. It smells like rotten eggs. But it does an important job in our bodies. Hydrogen sulfide relaxes blood vessels.

Relaxing blood vessels, in turn, allows more oxygen to travel to the body's organs. It lowers high blood pressure and protects the body against cardiovascular disease.

Some researchers in China have gone so far as to call hydrogen sulfide the key to a longer life.

So many studies on garlic!

In a 2007 study, researchers at the University of Alabama at Birmingham studied how garlic increased hydrogen sulfide and how that, in turn, affected red blood cells.

David Kraus led that study. At the time, he was an associate professor in the university's Departments of Environmental Health Sciences and Biology. He and his team performed their study on rats. They found that when garlic compounds changed into hydrogen sulfide in the vascular system, the gas caused the muscles to relax.

In their report, the researchers wrote, "This relaxation is the first step in lowering high blood pressure and gaining heart-protective effects." They found that these healthy effects are closely linked to the hydrogen sulfide produced from garlic compounds interacting with red blood cells.

In 2013, scientists were finally able to see this process happen. Chemists Alexander Lippert of Southern Methodist University in Dallas and Vivian S. Lin discovered how to observe this process in living human cells.

Their discovery has opened the door to more research into the health benefits of garlic and the production of hydrogen sulfide in the body.

In a 2015 experiment at Penn State University, researchers injected a solution that would create hydrogen sulfide in the arms of healthy young adults. They wanted to see what hydrogen sulfide would do to a small area of blood vessels.

The initial findings are that hydrogen sulfide widened blood vessels, which then increased the flow of blood. These researchers plan to continue their research. They published their findings in The Journal of Physiology.

Older garlic may be even healthier

But let's leave the laboratory and go to the kitchen. Don't throw out older garlic that has sprouted. You may have thought that garlic growing light green sprouts was past its prime or old and on its way to the trash bin.

But not so fast.

Scientists have reported in the Journal of Agricultural and Food Chemistry that this older garlic has even more properties that are good for our bodies than fresh garlic. When researchers tested garlic that had sprouted for five days, they found it had higher antioxidant activity than fresher bulbs of garlic.

Also, to get the full effect of garlic's health benefits, do not add it to food or cook with it immediately. Cutting, crushing or mincing garlic releases the healthy compound found in the vegetable. But heating the garlic or adding it to other ingredients prevents the release of this healthy compound. So cut or crush or mince the garlic, and let it rest by itself for a couple minutes.

So, are there any downsides to garlic? Well, the same reason garlic is good for us and good in dishes -- that strong sulfur odor -- is the same reason it gives us bad breath.

But there might be a cure for that, too. Yet another study found that eating an apple or lettuce after eating garlic cuts down on the strong garlic smell on one's breath.

I'm Anna Matteo. In the Comments Section, share how you use garlic in your cooking.

endurance – n. the ability to continue an activity for a long period

flammable – adj. capable of being easily lit and of burning quickly

cardiovascular – adj. of, relating to, or involving the heart and blood vessels

probe – n. an usually small object that is inserted into something so as to test conditions at a given point

initial – adj. of or relating to the beginning