Update Required To play the media you will need to either update your browser to a recent version or update your Flash plugin.
By Anna Matteo
21 November, 2016

For nearly 20 years, opioid abuse has been spreading across the United States. 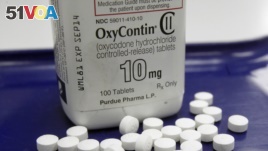 These are OxyContin pills, an opioid drug. Americans, even though comprising only five percent of the world's population, consume eighty percent of the its supply of pain medication. (AP Photo/Toby Talbot)

The problem is so great that the U.S. Department of Health and Human Service is calling 'opioid use disorder' an epidemic.

The Centers for Disease Control and Prevention (CDC) says that "from 2000 to 2014, nearly half a million Americans died from drug overdoses."

CDC officials reported that opioid overdose deaths "hit record levels in 2014, with an alarming 14 percent increase in one year."

The American Society of Addiction Medicine notes on their website that drug overdose is the leading cause of accidental death in the United States. The website says that in 2014, 47,055 people died nationwide because they took more than the medically recommended amount.

Prescription painkillers containing opioids have led to thousands of overdose deaths and stays in hospitals. But until now, researchers have yet to study how this epidemic affects the youngest members of society.

Julie Gaither is with the Yale School of Medicine in Connecticut. As an epidemiologist, she studies how diseases spread and how to control them. Gaither is concerned about the huge growth in opioid sales over the past 20 years.

"The opioid epidemic has grown exponentially. It really began in the mid-1990s when physicians were encouraged to do a better job of treating chronic pain. In 2014, there were approximately 19,000 deaths that were attributed to opioid medications."

The CDC says that 48 people nationwide in the U.S. die every day from opioid overdoses. And a new study found that over a 16-year period, more than 13,000 children and teenagers were hospitalized for opioid poisonings.

Deepa Camenga is another doctor at the Yale School of Medicine.

Both she and Gaither looked at hospital records showing children and young people sent home from hospitals. They wanted to find out how many children had been hospitalized in recent years for prescription opioid poisonings.

Camenga says the way that medicines with opioids are sold to patients needs to change. She also called for changes in the way in which the drugs are marketed and thrown away.

"Our national conversation has focused on how to improve the treatment and prevention of opioid misuse and abuse, but we also hope that this conversation focuses on how to safeguard children from this epidemic."

The researchers published the study in JAMA Pediatrics.

epidemiologist – n. medical: an expert in the study of how disease spreads and can be controlled

encourage – v. to make (something) more appealing or more likely to happen; to persuade

chronic – adj. medical: continuing or happening again and again for a long time

attributed – v. to explain by showing a cause <attributed his success to his coach>

epidemic – n. a situation in which a disease spreads quickly and affects many people

alarming – adj. of or related to a signal or warning