To Fight Malaria, Bed Nets Are the Most Important Weapon

Update Required To play the media you will need to either update your browser to a recent version or update your Flash plugin.
By Christopher Jones-Cruise
05 December, 2016

United Nations researchers are reporting progress in the fight against the disease malaria.

The researchers confirm that malaria-carrying mosquitoes are becoming more resistant to insecticide products. But they note that another way to guard against the insects -- chemically-treated bed nets -- still provides a lot of protection against the disease.

The researchers reported on a five-year-long study. The findings were released at a meeting of the American Society of Tropical Medicine and Hygiene in Atlanta, Georgia. 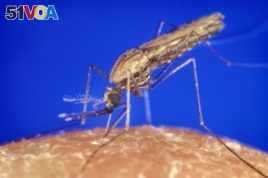 A parasite called plasmodium is responsible for the spread of malaria. Mosquitoes infected with plasmodium pass the disease to human beings through mosquito bites.

The parasites reproduce in the human liver, and then infect red blood cells. After they enter the blood cells, they reproduce again. As they do this, they destroy the cells.

Signs of the disease appear in victims 10 to 15 days after they are bitten. People with malaria develop a high body temperature. They also can become weak, are unable to hold down food and suffer pain in the head or muscles. If not treated, malaria can make the victim sick and even cause death.

WHO teams examined the effectiveness of long-lasting nets treated with insect-killing chemicals.

Tessa Knox, a WHO scientist, was one of the researchers. She says the result of the study was positive. It showed that "the long-lasting nets that are being used all throughout sub-Saharan Africa are still working." She says that finding showed that there needs to be an increase in the supply of nets. And she adds, health workers should "make sure that everybody who's living in at-risk areas is sleeping under a net and using the net correctly."

Mosquitoes have developed a resistance to the chemicals in the bed nets. But Dr. Knox says the netting still can offer protection against the disease.

"So a mosquito could land on a net and, while it wouldn't die immediately, what it would do is continue to search on the net for holes so that it can penetrate and go underneath and bite the person beneath the net. In the process of searching on the net, it contacts the net's surface and absorbs insecticide. And as it absorbs that insecticide, it would eventually take on a lethal dose, which would kill that mosquito. So even if they don't die immediately, the searching process would mean that eventually they may die."

Dr. Knox says there is an "urgent need for new and improved malaria-fighting tools." But she says until they are developed and deployed, officials believe the insecticidal nets will continue to be the main way malaria is prevented.

As part of the study, researchers in Sudan covered the walls of homes with an insecticide made from chemicals that differed from those used in bed nets. They say that step reduced infections by an additional 50 percent, compared with using only long-lasting insecticidal nets.

Dr. Knox says the insecticides used to kill malaria-carrying mosquitoes should not cause health problems for people.

"All of the chemicals that are being applied broadly across sub-Saharan Africa have been through a very strict safety testing to get the WHO recommendation that would allow their usage. So there aren't any concerns that the current insecticides that (manufacturers) have been using in the nets, nor are there concerns that the sprays that are being used on the wall, if they're being used in the correct way."

The World Health Organization says long-lasting insecticidal nets are one of the most important parts of malaria control efforts in African countries south of the Sahara Desert. That part of the continent has 90 percent of the world's malaria infections.

insecticide – n. a chemical substance that is used to kill insects

net – n. a device that is used for catching or holding things or for keeping things out of a space and that is made of pieces of string, rope, wire, etc., woven together with spaces in between; a net that is placed over something (such as a bed) in order to keep out mosquitoes

absorb – v. to take in (something, such as a liquid) in a natural or gradual way

apply – v. to put or spread (something) on a surface, a part of the body, etc.