ILO Warning on Children Caught in Conflict and Natural Disasters

Update Required To play the media you will need to either update your browser to a recent version or update your Flash plugin.
By Phil Dierking
17 June, 2017


The International Labor Organization, or ILO, has launched an appeal in support for children caught in conflict and natural disasters.

A new ILO report warns that those children are more at risk of child labor than boys and girls in other areas. It also says they are most at risk of falling victim to human trafficking and abuse, including sexual abuse.

The ILO report was released earlier this week to mark the World Day against Child Labor. It is urging governments to target and stop the worst forms of child labor. 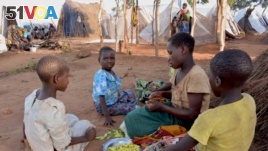 The worst forms of child labor

The ILO says the world faces its largest refugee and displacement crisis ever.

War and persecution have forced more than 65 million people to flee from their homes. The report says children are among those most at risk of abuse from the breakdown of families and social systems.

In December of 2016, the United Nations estimated that 535 million children -- nearly one in four -- live in countries affected by conflict or disaster.

The report says an estimated 168 million children are in child labor around the world. That number is said to include 85 million involved in the worst forms of child labor. This includes the use of children employed in slave-like conditions, in dangerous jobs, such as mining and agriculture, and in the use of children in battle or as sex workers.

Most children at risk live in Africa

The ILO report says child labor is more common in Africa than other areas. Officials estimate that about 59 million children in African countries are actively engaged in child labor. A United Nations finding provides support to this estimate. It found that three quarters of children living in areas affected by conflict (about 393 million) are in Africa.

Insaf Nizam works for the ILO. He told VOA that children are often abused in situations of conflict in Africa. He noted that many work as child soldiers for armed groups in places like Somalia, South Sudan, the Democratic Republic of Congo and the Central African Republic.

"We also have seen certain armed groups using children for extreme types of violence as suicide bombers or forcibly recruiting them as brides and for sexual slavery. So, the types of violations against children have increased in diversity," Nizam said.

Natural Disasters are also an issue

Nizam said that children also work as soldiers and suffer other forms of abuse in conflicts in Asia and the Middle East. He noted that in places such as Myanmar and the Philippines, children face greater risks from powerful storms or other natural disasters.

"You get a lot of displacement of children," Nizam said. "Families lose their livelihoods. Their community networks are lost. They are displaced. Communities become poor overnight. They lose their sources of income. Schools are either damaged or destroyed due to natural disasters. So, there children are pushed easily because of that."

Nizam said that people around the world are more likely to pay more attention to conflicts than natural disasters. This is especially true, he added, in the case of slow forming disasters such as extremely dry weather conditions and climate change.

According to Nizam, natural disasters are as harmful to children as conflicts.

­­­­­­­­­­­­Lisa Schlein reported this story for VOANews. Phil Dierking adapted her report for Learning English. George Grow was the editor.

How do you think the world can prevent child labor and exploitation? We want to hear from you. Write to us in the Comments Section or on 51VOA.COM.

persecution – n. to treat someone cruelly or unfairly especially because of race or religious or political beliefs

quarters – n. an amount equal to three of the four parts which make up something

recruiting – v. to find suitable people and get them to join a company, an organization, the armed forces, etc.