Update Required To play the media you will need to either update your browser to a recent version or update your Flash plugin.
By VOA
18 February, 2015

Officials from 60 countries, as well as spiritual leaders and police from across the United States, are attending the three-day meeting in Washington.

In his speech, Mr. Obama urged the United States and other Western countries to confront Islamist groups' "lie" that the West is at war with Islam.

"We are not at war with Isalm. We are at war with people who have perverted Islam," Mr. Obama said.

Vice President Joe Biden opened the conference Tuesday. He discussed the success of the United States' youth programs in cities with large immigrant populations. The vice president said he believes the United States has more experience in integrating minority youths into society than European nations. 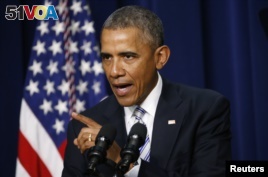 The rebels raised their flag Wednesday to claim victory of the city. A railroad runs through Debaltseve connecting Luhansk and Donetsk, two other rebel-held areas.

Mr. Poroshenko said 80 percent of the Ukrainian troops in the city had left by early Wednesday. The rest were leaving in what he described as a planned and orderly withdrawal.

Prosecutors searched the Swiss office of the British banking company HSBC Wednesday. They also announced a criminal investigation against HSBC. The bank is charged with laundering money.

The raid took place at the offices of HSBC Private Bank Switzerland in Geneva.

Miss P, a beagle, won Best in Show over six other competitors. Miss P is only the second beagle to ever win the top award.

Nearly 200 breeds of dogs from across the United States and several other countries took part in this year's show.

integrate – v. to make (a person or group) part of a larger group or organization

orderly – adj. arranged or organized in a logical or regular way

money laundering – n. the hiding of the origins of illegally obtained money