White House Confirms Death of US Hostage in Syria

Update Required To play the media you will need to either update your browser to a recent version or update your Flash plugin.
By VOA
11 February, 2015


U.S. officials have confirmed that an American woman held hostage in Syria is dead. Twenty-six-year old Kayla Mueller was kidnapped in August of 2013 while doing aid work.

However, the U.S. questioned the claims made by the Islamic State that Ms. Mueller died in the airstrike. U.S. officials said there was "no evidence of civilians in the target area."

Ms. Mueller's parents wrote in a statement they were "heartbroken" over their daughter's death. They called her a humanitarian who, in their words, "dedicated the whole of her young life to helping those in need of freedom, justice, and peace." 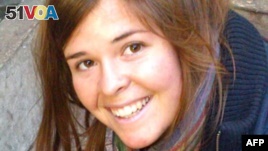 A VOA reporter in the area said locals told him the town is under "full control" of Ahlu Sunna Wal Jama'a. The group is considered moderate. It has helped the Somali government in fighting the Islamist militant group al-Shabab. However, the two sides are disputing the group's representation in the local and national government.

At a news conference Tuesday, President Putin said he and Egyptian President Abdel Fattah el-Sissi had agreed to increase cooperation in several areas, including Russian investments in Egypt, tourism, and cooperation in the battle against terrorism.

U.S. President Barack Obama spoke by phone to Russian President Vladimir Putin on Tuesday. He called to discuss the increasing violence in eastern Ukraine and Russia's support for the separatists fighting there.

Mr. Obama urged the Russian leader to support a peace deal for Ukraine at a four-country meeting in Belarus this week. Leaders from Russia, Germany, France and Ukraine will meet in the Belorussian capital of Minsk Wednesday to review a possible peace deal.

dedicated – adj. having very strong support for or loyalty to a person, group, cause, etc.

moderate – adj. having or expressing beliefs that are neither very liberal nor very conservative