US Senator Calls for Ground Troops to Fight IS Militants

Update Required To play the media you will need to either update your browser to a recent version or update your Flash plugin.
By Caty Weaver
02 February, 2015


United States Senator Lindsey Graham says there must be a change to the strategy in the fight against the Islamic State militant group. The Senator from the state of South Carolina spoke Sunday on the American television news program, "Face The Nation."

He said President Barack Obama has the right goal but the wrong plan to defeat the Islamic State group. He said an air campaign will not destroy the group. He said the effort requires ground troops.

The Islamic State group has seized control of large parts of Syria and Iraq. Mr. Graham called for the formation of a regional force to enter Syria and recapture territory from the Islamic State Group. He said about 10,000 U.S. soldiers should work with Arab armies in the area.

Jordanian Foreign Minister Nasser Judeh also appeared Sunday on "Face the Nation." He said his government does not know the fate of a Jordanian fighter pilot who the Islamic State captured and threatened with death. 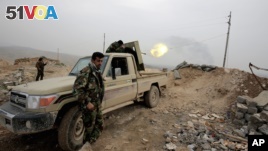 Mr. Judeh said the government has renewed its promise to release a female Iraqi rebel sentenced to death in Jordan.

"We have said publicly that, if there is proof of life, and if our pilot is released, we are willing to release this woman. But, like I said, so far we have seen no proof of life, which we have been asking for."

Militants captured the pilot in December, after his fighter plane was shot down over an Islamic State-controlled area of Syria. 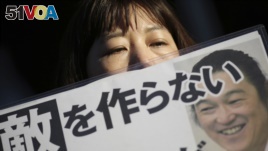 A Japanese woman reads a newspaper article about Kenji Goto.

Islamic State militants executed one of their hostages last week, a reporter from Japan. The international community condemned the beheading of 47-year-old Kenji Goto. The act was reportedly recorded on video and released Saturday.

The U.N. Security Council Sunday called the killing "heinous and cowardly." It said those responsible "shall be held accountable."

Japanese Prime Minister Shinzo Abe said Sunday he was extremely angered by Mr. Goto's beheading and that of fellow Japanese Haruna Yukawa a week earlier. On Monday, Mr. Abe said his government would not give in to terrorists. He also said Japan would increase its humanitarian aid to the Middle East.

The prime minister urged Japanese lawmakers to ensure the safety of Japanese citizens wherever they are. He also said the government should not limit the places to which the country's defense forces can be deployed to defend allies.

"They have an idea that they need forces that can hold a position, whether it's an airport or a seaport allowing Japanese self-defense forces to extract Japanese civilians from danger zones."

Mr. Cucek said, "He reported on the children of war zones, on refugees. He really went into some very, very dangerous places and came out again every time, but a man of tremendous bravery who was trying to report on what was going on in the world from ground level."

He said many Japanese did not know of the reporter when he was alive. "But everyone knows him now," he said.

Victor Beattie reported this story from Washington. Caty Weaver wrote it for Learning English. Ashley Thompson was the editor.

strategy – n. a careful plan or method for achieving a goal usually over a long period of time

bravery – n. the quality that allows someone to do things that are dangerous or frightening: the quality or state of being brave

fate – n. the things that will happen to a person or thing: the future that someone or something will have

Do you agree with Lindsey Graham that the U.S. should use ground troops to fight Islamic State militants? Tell us what you think in the comments section below.