Israeli Soldiers Killed in Exchange of Gunfire with Hezbollah

Update Required To play the media you will need to either update your browser to a recent version or update your Flash plugin.
By George Grow
28 January, 2015


Two Israeli soldiers and a United Nations peacekeeping soldier were killed Wednesday along the border between Israel and Lebanon. It was the biggest increase in fighting between Israel and the Lebanese militant group Hezbollah since their war in 2006.

The United Nations called on both sides to show restraint to prevent more violence.

The U.N. peacekeeper was killed in southern Lebanon in an exchange of gunfire. It began with a Hezbollah rocket attack on Israeli military vehicles. The soldier was from Spain. 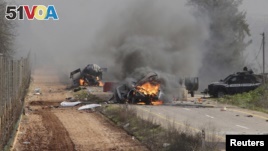 Hezbollah claimed responsibility for an attack on an Israeli military convoy near the village of Ghajar on Jan. 28, 2015. (REUTERS/Maruf Khatib)

The Israeli military reported that, in addition to the dead, seven Israeli soldiers were wounded in the rocket attack.

Hezbollah suggested the attack was meant to answer an airstrike in Syria. The strike killed six Hezbollah members and an Iranian general earlier this month. The militant group blames Israel for the raid.

A Jordanian official says his government is ready to trade a jailed terror suspect for a Jordanian pilot being held by Islamic State militants.

Information Minister Mohammad al-Momani made the announcement on state television Wednesday. He said if the pilot is released unharmed, Jordan will release an Iraqi woman, Sajida al-Rishawi. She was jailed for taking part in a terror attack 10 years ago in the Jordanian capital, Amman. Sixty people died in the attack.

The pilot was identified as Lieutenant Mu'ath al-Kaseasbeh. The Jordanian official did not talk about a second hostage, Japanese reporter Kenji Goto. The Islamic State has threatened to execute him. Japan's government has asked for help from Jordan to win his release.

Afghan lawmakers have rejected most of President Ashraf Ghani's nominees for the new cabinet. In a vote Wednesday, the lower house of the Afghan parliament rejected 10 of his 19 choices for minister positions. Among them was the choice for defense minister, Sher Mohammad Karimi. He currently serves as chief of the Afghan army.

The Afghan lawmakers also voted in support of Rahmatullah Nabil to serve as director of the intelligence services.

He said he wishes to avoid any destructive conflicts with Greece's creditors. But he said his country would no longer blindly obey the demands of the European Union.

Mr. Tsipras said international efforts to fix Greece's financial problems have led to a humanitarian crisis in his country. The government is seeking to remove some of its debt and ease cost-cutting measures. International lenders required the cuts in exchange for more than $300 billion in loans.

Freedom House says the likelihood of an international system built on democratic ideals is under greater threat now than at any time in the past 25 years. The rights group said in a report Wednesday that the state of democracy in 2014 was, in its words, "exceptionally grim." Freedom House rated Syria at the bottom of the yearly report. The group said it recorded more declines, or decreases, than gains in democratic freedoms around the world.

Freedom House said the one exception is Tunisia. In 2014, Tunisia became the first Arab country to be classified as "free" since Lebanon's civil war 40 years ago.

This report was based on stories from VOA's News Division. George Grow wrote this newscast for VOA Learning English. Ashley Thompson was the editor.

war - n. fighting between nations, or groups in a nation, using weapons

exchange - n. an event in which people direct something at each other

militants - n. people active in trying to cause political change, often by the use of force or violence

blindly – adv. without thinking or questioning