Update Required To play the media you will need to either update your browser to a recent version or update your Flash plugin.
By VOA
21 January, 2015

With these words, President Barack Obama delivered his State of the Union address to a new Congress controlled by the Republican opposition.

Mr. Obama said, "So tonight, I want to focus less on a checklist of proposals, and focus more on the values at stake in the choices before us." He added that the budget coming in two weeks will represent "ideas that are practical, not partisan."

The president challenged Congress to take "bold action" and "to make sure everyone gets a fair shot" as part of what he called the middle class economics.

The president called for higher taxes on wealthy Americans, ending tax breaks on inheritance and new fees on corporate profits. The new revenues, estimated at $320 billion over the next 10 years, will finance tax breaks for the middle class and other proposals, such as free tuition for community college students. Mr. Obama also called for a higher minimum wage for workers, equal pay for women and paid sick leave, maternity leave and child care assistance for working families. 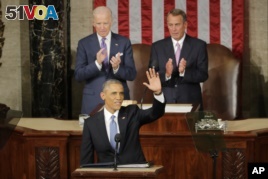 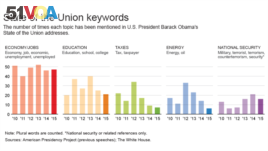 State of the Union keywords

In his words, the president said, "That's what middle-class economics is – the idea that this country does best when everyone gets their fair shot, everyone does their fair share, and everyone plays by the same set of rules."

Leaders of the Republican-controlled Congress were quick to reject his proposals. A spokesman for House Speaker John Boehner called the president's proposals as "more Washington tax hikes ... the same, old top-down approach we've come to expect from President Obama that hasn't worked."

Calling on Congress to pass a resolution against ISIL

Declaring, "for the first time since 9/11, our combat mission in Afghanistan is over," the president, however, asked America to continue to lead in the fight against global terrorism.

The president touched on the deadly attack of school children in Peshawar and the recent shooting deaths in the Paris office of Charlie Hebdo. And he called on Congress to pass "a resolution to authorize the use of force against ISIL."

In light of recent hacking incedents involving China, North Korea and Russia, the president also called on Congress to "pass the legislation we need to better meet the evolving threat of cyber-attacks, combat identity theft, and protect our children's information."

He added, "If we don't act, we'll leave our nation and our economy vulnerable."

Mr. Obama went on to recite a list of achievements for his administration, from opening diplomatic relations with Cuba to a climate change agreement with China. Again, he renewed the call to close Guantanamo prison, the same prison that he has tried to close since the first day of his presidency.

In a nod to politics and the difficulties ahead in dealing with his first Republican-controlled Congress, Mr. Obama said, "I have no more campaigns to run."

"If you share the broad vision I outlined tonight, join me in the work at hand. If you disagree with parts of it, I hope you'll at least work with me where you do agree."

Hai Do wrote this story for VOA Learning English. James Tedder was the editor.