French President Francois Hollande said Thursday that mainstream Muslims are the main victims of radical Islamism. The French president spoke in Paris at the Arab World Institute, which seeks to build closer ties between France and Arab cultures.

He said a crisis like last week's shooting at the Charlie Hebdo magazine could awaken people, in his words, to "shout their message all the louder." But he added that the whole country was "united in the face of terrorism."

President Hollande also said that Islam is "compatible with democracy" and that "French people of the Muslim faith have the same rights, the same duties as all citizens."

Twelve people died at the Charlie Hebdo offices and five more over the next two days in acts of terror in and around Paris. Two more funerals were being held Thursday for victims of last week's attacks.

The United States Treasury announced Thursday that new rules relaxing trade and travel restrictions to Cuba will go in effect on Friday. 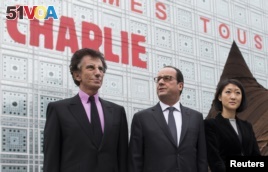 The move is a step toward the Obama administration's goal, announced last month, of normalizing ties with Cuba.

In a statement Thursday, Treasury Secretary Jack Lew said the United States is now "one step closer to replacing out of date policies that were not working."

Under the new rules, Americans will not need to apply for a license to be able to travel to Cuba for any approved reasons. Travel agents and airlines also will be allowed to provide authorized services without a license. General tourism to Cuba, however, remains banned. 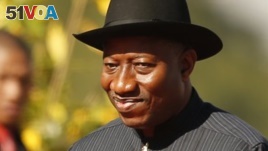 Nigerian President Goodluck Jonathan has made a surprise visit to northeastern Borno state, the center of the Boko Haram insurgency.

President Jonathan, who is campaigning for re-election, flew to the state capital of Maiduguri on Thursday. There, he spoke to troops at an army barracks. He also met with hundreds of civilians displaced from Baga, a town captured by Boko Haram insurgents earlier this month.

The president has been criticized for not doing enough to push back the insurgents or to recover more than 200 schoolgirls kidnapped by Boko Haram in April 2014.

The group has killed thousands of people and taken over large parts of Borno state. President Jonathan declared a state of emergency there and in two nearby states in May 2013.

Two movies led the selections, each with nine nominations, including best picture.

The Academy Awards will be broadcast on February 22 from Hollywood, California.

compatible – adj. able to exist together without trouble or conflict : going together well

insurgency – n. a usually violent attempt to take control of a government : a rebellion or uprising

reinvent – v. to make major changes or improvements to (something)