Update Required To play the media you will need to either update your browser to a recent version or update your Flash plugin.
By VOA
21 January, 2015

The Shi'ite Houthi rebels surrounded the presidential home most of Wednesday after fighting with Yemeni security forces on Tuesday.

The Yemeni government offered to make changes to a new constitution. In return, the rebels are expected to release the president's chief of staff, who they kidnapped Saturday. 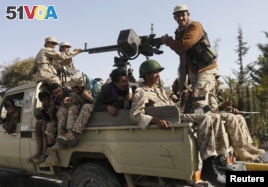 On Tuesday night, a Shi'ite Houthi rebel leader spoke on television. He said that his group wants an end to what he called "corruption and totalitarianism" in Yemen.

The speaker warned of additional possible action against the government.

Arab media report that the Houthis are demanding 50 percent of key ministerial positions as part of an agreement to share power.

The Shi'ite Houthi group is strongly opposed to the militant Yemen-based Al-Qaida in the Arabian Peninsula (AQAP). That group claimed attacks against the French magazine Charlie Hebdo earlier this month.

The Houthi rebels are also against U.S. interference in Yemen.

Japan in "race against time" to free hostages

Japanese Prime Minister Shinzo Abe said his country is in a "race against time" to free two hostages being held by the Islamic State. The militant group is demanding $200 million in ransom.

Mr. Abe spoke with reporters Wednesday in Tokyo. He said he told officials to do whatever they can to secure the release of Kenji Goto and Haruna Yukawa.

Islamic State militants released a video Tuesday saying they would kill the men unless Japan paid the money within 72 hours.

Japan had offered $200 million in non-military aid to countries affected by the Islamic State. In Tuesday's video, the militants connected the ransom amount to Japan's offered support to fight the group.

Mr. Abe said Wednesday that Japan "will never give in to terrorism."

The leader of the Roman Catholic Church has sought to further explain a comment he made Monday. Pope Francis said that Catholics should not breed "like rabbits." He added that there are ways to limit births without using pregnancy prevention methods that are banned by the Church.

His comment Monday offended some people with large families. Many spoke out on social media.

On Wednesday, during his usual weekly talk, the Pope praised the many families he saw on his recent trip to The Philippines. He said that economic injustice – not large families – was the real cause of poverty.

"I have heard it said that families with many children and the birth of many children are among the causes of poverty. I think that is a simplistic opinion," the pope said.

The United States and Cuba opened talks Wednesday in Havana.

The two-day meeting is the first official talks between the countries in more than 50 years.

Assistant Secretary of State Roberta Jacobson is leading the U.S. delegation in Cuba. She is the first top American diplomat to visit Cuba in more than thirty years.

Talks Wednesday centered on immigration issues. On Thursday the officials are to discuss diplomatic issues, including the reopening of U.S. and Cuban embassies in both capitals.

totalitarianism - n. the very strong rule of a people by a leadership with complete power

ransom – n. money that is paid in order to free someone who has been captured or kidnapped