Update Required To play the media you will need to either update your browser to a recent version or update your Flash plugin.
By Bryan Lynn
17 December 2020

Restrictions related to the pandemic have made it difficult to carry out emergency measures aimed at reducing critical pollution levels.

In the past, India's government has ordered the closure of schools and buildings in populated centers to reduce levels of harmful air. It has also attempted to get more people to use public transportation to reduce vehicle emissions and to ride buses that run on cleaner fuels.

But social distancing rules and economic concerns have affected the progress of such actions. For example, the pandemic has led to limits on the number of passengers permitted on public buses. 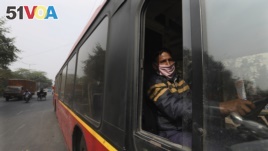 Surinder Singh is a bus driver in New Delhi. He told The Associated Press he feels trapped between the country's two public health emergencies: pollution and the pandemic.

Singh sits for hours in heavy traffic, breathing in the city's polluted air. In addition, he says he worries about catching the coronavirus every time a person gets on his bus.

The 47-year-old father of two says the current economic situation gives him no choice, but to go to work. He carries hand sanitizer and wears a face covering to reduce his chances of becoming infected. But, Singh says, "I drive the bus in constant fear."

Millions of others across India face a similar situation as the country experiences a historic recession. The economy shrank by 23.9 percent in the April-June quarter, its worst performance in at least 24 years.

The virus continues to spread in India, with over 9.7 million cases and more than 140,000 deaths. In addition to people with COVID-19 – the disease caused by the coronavirus - Indian hospitals are also filling up with patients suffering with conditions related to air pollution.

Some of the country's long-term pollution targets have now been delayed by economic recovery plans. India plans to increase coal production to reduce imports. And the recovery plans depend heavily on energy sources that produce carbon emissions.

"This pandemic will define the pathway of how we move in the future (to control air pollution)," said Sunil Dahiya. He is an expert with the Centre for Research on Energy and Clean Air.

The threats posed by both the virus and pollution have hit New Delhi extremely hard. This year, the yearly rise in winter pollution has come at the same time as a sharp increase in new virus cases. The city is among the most polluted in India, where an estimated 1.67 million people die each year from bad air.

Dr. Akshay Budhraja is a respiratory doctor at a private hospital in New Delhi. He told the AP the hospital has been flooded with patients with respiratory issues who thought they had COVID-19. "Patients are very, very anxious," he said.

Pollution in New Delhi gets worse in the fall and winter when crop burning in neighboring states combines with cooler temperatures that trap smoke close to the city. Over 76,000 farm fires were spotted by satellites in Punjab state - the most since 2016. And the city's air quality levels in October were worse than past years.

The pandemic also has delayed efforts to clean emissions at coal-fired power plants, which make up about 65 percent of India's electricity. The government had asked plants to add technology that would remove sulfur dioxide from their emissions by 2022. But financing issues related to the pandemic made it impossible to import the required equipment, industry officials said.

The Associated Press reported on this story. Bryan Lynn adapted this report for VOA Learning English. Susan Shand was the editor.

emission – n. the act of producing or sending out something such as energy or gas from a source; something sent out or given off

constant – adj. happening a lot or all of the time