Update Required To play the media you will need to either update your browser to a recent version or update your Flash plugin.
By Dan Friedell
29 June, 2017

The iPhone turned 10 years old on Thursday, and many people took a moment to remember the first time they saw the Apple device.

When it came out on June 29, 2007, people were lining up outside stores around the world to buy the phone. It was a big success for the computer company that made the Macintosh and the iPod.

The hashtag #iPhoneAt10 was trending on Twitter most of the day.

One person called it a "revolution," and others posted about the phone's "evolution" in the last 10 years.

"Massive" is the word CNN used to describe the businesses that grew up around the phone's popularity. 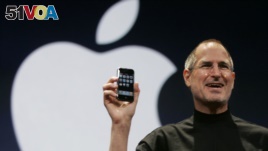 Steve Jobs announces the first iPhone at an Apple event in early 2007.

The current version is iPhone 7, but many people expect an iPhone 8 to come out soon. Some technology reporters say the next iPhone will come out in September, and it will be even larger than the ones we see today.

The first iPhone's display was about nine centimeters. The newest one is expected to be about 14 centimeters.

The first phone cost close to $500. The current version of the phone costs a little more than $600.

According to Entrepreneur magazine, the 2008 version of the iPhone, known as the 3G, was the first to use faster cellular networks, GPS and allowed users to buy apps from the App Store.

Small improvements were made along the way. The largest iPhone, the 6 Plus, came out in 2014.

By 2016, there were over 2 million apps available. That is also when Apple sold its 1 billionth iPhone.

One Twitter user called the iPhone "astonishing" and wrote "hard to imagine going without it now."

A designer in Minnesota found her old iPhone and plugged it in to see if it would still start up. "It still boots!" she wrote.

While many people said the iPhone made their lives easier, others were happy to point out its flaws.

Autocorrect is supposed to fix typing mistakes when you write messages on your phone. Many people say it still has problems, even 10 years later.

Others complained about the phone's battery, memory and charger.

Even the London, England fire brigade wrote: "don't use cheap, dodgy chargers. You could have a nasty surprise."

How many iPhones did you use in 10 years? We want to know. Write to us in the Comments Section or on 51VOA.COM.

evolution – n. a process of slow change and development

timeline – n. a line that includes marks showing when particular events happened in the past

boot – v. to start a computer

astonishing– adj. causing a feeling of great surprise or wonder