Update Required To play the media you will need to either update your browser to a recent version or update your Flash plugin.
By VOA
22 August, 2014

Sunni Muslim leaders in Iraq say Iraqi security forces must change before they can fight Sunni militants in the country. The leaders are considering whether to support the new government of Haider al-Abadi, the designated -- chosen -- prime minister. They are concerned because Shi'ite Muslims control the security forces.

United States airstrikes against Islamic State militants helped Iraqi troops recapture the important Mosul dam in Iraq's northern Kurdish area. But some observers say pushing the militants back across the border with Syria is likely to require greater efforts by the government in Baghdad.

Steve Heydemann is with the U.S. Institute of Peace. He says the Iraqi government must take the lead in fighting the militants. 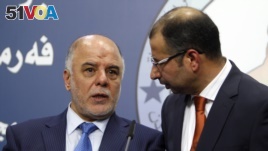 "The U.S. has made very clear that it views this problem, the problem of ISIS, as centrally a problem of the central government in Iraq and not as a problem that the U.S. can solve."

And experts say Iran will have to help solve the problem. They note that Iran helped the former government of Nouri al-Maliki create the current situation. Steve Heydeman says Iran continues to have influence in Iraq.

"It doesn't much matter to them which Shi'ite is the prime minister in Iraq. (That) Iran will continue to wield influence in Iraq."

Iran supports Syrian government forces and Hezbollah militants in Lebanon. The U.S. and its allies have denounced Iran for those activities. But some experts say the U.S. and Iran should cooperate in increasing security in Iraq.

American University professor Guy Ziv says greater cooperation between the U.S. and Iran may change Iran's support of the Syrian government and Hezbollah.

U.S. officials say the threat presented by Islamic State militants goes beyond Iraq. Defense Secretary Chuck Hagel says the threat to world security is, in his words, "beyond anything we have seen."

Efforts To Save Reporter Fail

Secretary Hagel spoke one day after the militant group killed American reporter James Foley. On Wednesday, the Defense Department said that an attempt to rescue the reporter had failed. Mr. Foley had been held for about two years in Syria by the Islamic State.

But having the Islamic State as a common enemy will not solve basic differences between the U.S. and Iran. Former U.S. Ambassador Adam Ereli says Iran continues to support groups in Iraq and the Middle East that put it in opposition to the U.S. and its allies.

"If you look at any issue -- Hamas, Syria, Iraq, the nuclear file, human rights inside Iran -- there is a consistency of behavior and a consistency of policy that doesn't change. And it is a policy that is innately hostile to our interests and the interest of our allies."

Iraqi Prime Minister Haider al-Abadi probably will need both Iran and the U.S. to effectively fight the Islamic State. He will also have to persuade Iraqi Sunnis and Kurds to support his new government in Baghdad.

And that's In The News from VOA Learning English. I'm Bob Doughty.

Efforts – n. an attempt; the work necessary to do something

Allies – n. a nation or person joined with another for a special purpose

Threat – n. a person, group or thing that is likely to cause damage or danger

Rescue – n. to free from danger or evil