Update Required To play the media you will need to either update your browser to a recent version or update your Flash plugin.
By VOA
14 August, 2014


Obama Promises Support for Iraqis, Maliki Agrees to Step Aside

The Iraqi state television network Iraqiya reported late on Thursday that Nouri al-Maliki has "relinquished the post of prime minister."

Mr. Maliki said he would support the nomination of Haider al-Abidi to be the next prime minister. The news came shortly after Mr. Obama urged Iraqis to come together in support of Mr. Abadi's effort to form a government.

Mr. Obama also said the refugee situation on Mount Sinjar had greatly improved. Thousands of Yazidi refugees had fled to that area to attacks by members of the Islamic State militant group.

U.S. military and civilian advisers visited northern Iraq Wednesday. They informed the president that most Yazidi refugees had already left the mountain. And those who chose to stay were in good condition.

But, the president said, "the situation remains dire" in other parts of Iraq. He said the U.S. would continue to work with its international partners to support Iraqis in the fight against the Islamic State militants. 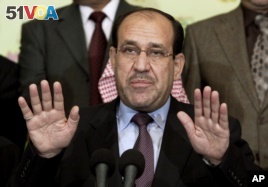 Iraqi Prime Minister Nouri al-Maliki, seen here in a March 2010 file photo, has given up his post as prime minister to Haider al-Abadi.

Mr. Obama has directed the Justice Department to investigate the shooting of Michael Brown, a black teenager in Ferguson, Missouri.

The shooting resulted in a fourth straight night of protest. The protest turned violent Wednesday night when police fired rubber bullets, tear gas and smoke bombs at the crowd.

The United States' top military officer, Martin Dempsey, is in Vietnam for talks with officials there about expanding defense ties. The increased cooperation comes as Vietnam is involved in a territorial dispute with China in the South China Sea.

Trade between the U.S. and Vietnam started in 1995. However, the U.S. has continued with a 1975 ban on sales of weapons to Vietnam.

Pope Francis said talk, not shows of force, will help bring peace to the North and South Korea. He spoke at the start of a five-day visit to South Korea.

situation - n. the way things are during a period of time

crowd – n. a large number of people gathered in one place

cooperate – v. to act or work together

missile – n. any weapon that can be thrown or fired through the air and explodes when it reaches its target

Now it's your turn to use these Words in the News. In the comment section, write a sentence using one of these words and we will provide feedback on the use of vocabulary and grammar.