Is the World a Mess?

Update Required To play the media you will need to either update your browser to a recent version or update your Flash plugin.
By Hai Do
01 August, 2014

The word "mess" can be used to describe something complex or very difficult to deal with. A former United States official used the word last weekend when she spoke about recent world events. "To put it mildly," Madeleine Albright said, "the world is a mess."

Ms. Albright was the first woman to serve as Secretary of State. She served as the country's top diplomat during the presidency of Bill Clinton.

Ms. Albright appeared on the CBS News program Face the Nation. Reporter Bob Schieffer asked her if she knew of "a time when there was so much trouble in so many different places?" 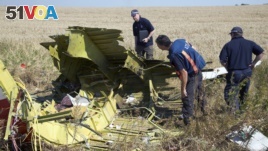 She said two "huge game changers" have affected recent events. One is the behavior of Russian Vladimir Putin toward Ukraine. The other is what has been happening in the Middle East, starting with the political unrest known as the Arab Spring. She also noted what she called "the artificiality of the borders that were established after World War I."

The conflict in Ukraine has been in the news almost daily since the shooting down of Malaysian Airlines Flight 17 last month. All 298 people on the airplane were killed. The same day, the Israeli military launched a campaign against Hamas supporters in the Gaza Strip. Since then, more than 1,000 people have died in the fighting.

The war in nearby Syria has displaced millions of people. Thousands of Central American children have entered the United States illegally and without their parents. Add to that the religious violence in Iraq. So some would say the world does appear to be a mess at the present time.

Wounded Palestinian children are treated in a hospital in Rafah in the southern Gaza Strip, Friday, Aug. 1, 2014.

Micah Zenko is a senior fellow at the Council on Foreign Relations in Washington, D.C. He says many people believe that the world is either on fire or "facing chaos or spinning out of control." He thinks technology and social media are driving news reports on the conflicts. He notes the influence of broadcasters like CNN.

"Part of this is because it is so vivid, the imagery and the concerns and the instability, and this is now translated in real time -- not just as they used to call 'the CNN effect' but it's sort of the CNN effect on steroids, which is to say journalists, activists, researchers in conflict-prone countries can place images of suffering, of damage, and they can appear on your Twitter feed, on your Facebook posts sort of instantly. And so it's in not just real time but sort of immediacy that allows us to connect with suffering in a way that we don't see in terms of positive news stories."

The Council of Foreign Relations lists 33 conflicts on a part of its website called the Global Conflict Tracker. Reports about these conflicts have appeared in news media over the past six months.

Micah Zenko says the world has experienced other periods of chaos or unrest. The issue, he says, is that positive, or good, news does not get reported. He notes the drop in the number of child deaths and progress in fighting diseases like polio. He says people are living longer than their parents did and generally have better health. He also notes the spread of democracy around the world.

And, that's In The News from VOA Learning English.

This report is based on the CBS News program "Face the Nation," the Council on Foreign Relations' Global Conflict Tracker website and VOA News reports. It was written by Hai Do and edited by George Grow.