Update Required To play the media you will need to either update your browser to a recent version or update your Flash plugin.
By Gregory Stachel
07 September 2022


Diplomats from the United States, Japan and South Korea confirmed their commitment to working together against possible threats from North Korea.

The officials represent their countries on nuclear weapons issues. They met Wednesday in the Japanese capital, Tokyo, agreeing to strengthen their security ties.

"North Korea is continuing and even accelerating its nuclear and missile capabilities," said Japanese diplomat Takehiro Funakoshi before Wednesday's discussions. He noted a possible threat of more nuclear tests by North Korea. 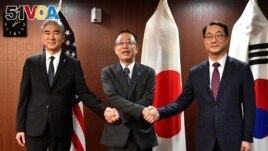 The country has performed an unusually high number of missile launches this year. And the United States has warned that North Korea could sell weapons to Russia.

Wednesday's meeting followed similar talks over the past two months.

One took place between security advisers in Hawaii last week. At the same time, there were signs North Korea might be performing its first nuclear test since 2017.

Sung Kim said the U.S., Japan and South Korea are prepared for any actions North Korea might carry out. And he said the U.S. goal has not changed: It seeks denuclearization of Korea.

In August, North Korea fired two missiles from its west coast after South Korea and the United States began their largest field military training in years. North Korea has said it considers the training preparation for war.

Kim Sung-han is South Korea's national security adviser. Speaking after the meeting, he said that the representatives agreed there would be what he called a "soft" answer if North Korea performed a nuclear test. He did not give details, but the South Korean government in the past has proposed increasing sanctions.

provocation – n. an action or occurrence that causes someone to become angry or to begin to do something

accelerate – v. to cause (something) to happen sooner or more quickly

capabilities – n. the ability to do something

loom – v. to appear in a large, strange, or frightening form often in a sudden way

sanctions – n. an action taken to force a country to obey international laws by limiting trade or aid to the country

literally – adv. used to stress a statement or description that is true and accurate though it may be surprising