Update Required To play the media you will need to either update your browser to a recent version or update your Flash plugin.
By Mario Ritter Jr.
26 December, 2018


Japan says it plans to restart commercial hunts for whales in July of 2019.

Japan's Chief Cabinet Secretary, Yoshihide Suga, made the announcement on Wednesday. He also said that his country would withdraw from the International Whaling Commission (IWC). The international agency, based in Britain, was set up to provide for the protection of whales and the orderly development of the whaling industry.

Suga said that Japan would restart commercial whaling in keeping with "Japan's basic policy of promoting sustainable use" of sea life based on scientific evidence. 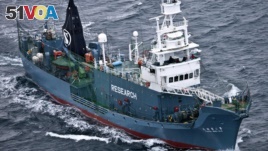 FILE - A Japanese whaling ship sails in the Southern Ocean off Antarctica. Japan has withdrawn from the International Whaling Commission, but says it will no longer hunt whales near the Antarctic.

He added that Japan is unhappy with the commission. The IWC is based on a treaty designed to represent both environmental concerns and whaling nations. But, he said, environmentalists have the most influence.

The chief cabinet secretary also announced that Japanese crews would no longer go to the Antarctic and northern Pacific oceans to hunt whales as it did in the past.

Instead, he said, Japanese whale hunts would be limited to the country's territorial waters and exclusive economic zone. That area extends 323 kilometers from the coast of the island nation.

Japan's Fisheries Agency said it planned to permit the catch of three kinds of whales: minke, sei whales and Bryde's whales. It said that numbers of species have recovered enough to permit whaling.

The IWC ordered the ban on commercial whaling over 30 years ago. The move sought to increase the animals' numbers in the world's oceans.

Japan continued whaling for scientific research under the IWC rules. Environmentalists criticized the hunts, saying they were commercial because whale meat was sold in Japan.

Japanese officials say the country will remain as an observer to the IWC and will take part in the group's scientific meetings and conferences.

The environmental group Greenpeace disputed Japan's position that whale numbers had recovered. Sam Annesley, head of Greenpeace Japan, said the Japanese announcement was, in his words, "out of step with the international community." He called on the country to preserve sea life.

The Australian government said it was "extremely disappointed" about Japan's decision to withdraw from the IWC. However, Australia and New Zealand's Foreign Minister Winston Peters welcomed Japan's halt to Antarctic whaling.

In 2014, Japan cut back on whale hunting after the International Court of Justice ruled against its Antarctic whale hunting program. Japan currently hunts about 600 whales each year in the Antarctic Ocean.

Suga said Japan would officially inform the IWC of its decision by the end of 2018.

commercial – adv. related to buying or selling of goods for profit

promote – v. to help something to happen, develop or increase

exclusive – adj. limiting or limited use of something

sustainable – adj. relating to a method of harvesting so that the crop or product is not permanently damaged