How Johnny Appleseed Grew Into a Folk Hero

Update Required To play the media you will need to either update your browser to a recent version or update your Flash plugin.
By George Grow
23 June, 2012

STEVE EMBER: And I'm Steve Ember with the VOA Special English program PEOPLE IN AMERICA. Today we tell about a man known as Johnny Appleseed. Many people considered him a hero.

FAITH LAPIDUS: Johnny Appleseed was the name given to John Chapman. He planted large numbers of apple trees in what was the American wilderness two hundred years ago. Chapman grew trees and supplied apple seeds to settlers in the middle western Great Lakes area. Two centuries later, some of those trees still produce fruit. 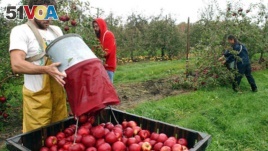 Apple pickers harvest fruit in Massachusetts, the home state of John Chapman, better known as Johnny Appleseed
As a result of stories and poems about Chapman's actions, Johnny Appleseed became an American hero. However, some of the stories told about Johnny Appleseed over the years may not have been really true.

John was the second of three children. Little is known about his childhood. His mother Elizabeth became sick with tuberculosis and died a short time after the birth of her third child. In seventeen eighty, Nathaniel Chapman married Lucy Cooley of Longmeadow, Massachusetts. John and his older sister moved to Longmeadow with their father and his new wife. This new marriage produced ten more children.

FAITH LAPIDUS: When John Chapman was old enough to leave home, he asked his half-brother, Nathaniel, to come with him. They slowly traveled south and west from Massachusetts to the state of Pennsylvania. At that time, much of western Pennsylvania was undeveloped.

Government records show that John lived in the Allegheny Mountains in seventeen ninety-seven. He is said to have cleared land and planted apple seeds near a waterway. In a short time, the seeds grew to become trees that produced fruit.

STEVE EMBER: Pennsylvania was the first stop in what would become a life-long effort to plant apple trees. The reason for John Chapman's life's work is unknown. Some people said he loved to watch the flowers on apple trees grow and change into tasty fruit.

Apples were an important food for the early settlers of North America. Apples offered something different in daily meals. They were easy to grow and store for use throughout the year. They could be eaten raw, cooked or dried for eating during the winter. And they could be made into other products, like apple butter and apple juice.

FAITH LAPIDUS: After a few years, Chapman left the hills of western Pennsylvania and traveled west into the Ohio Valley. He transported sixteen bushels of apple seeds down the Ohio River in eighteen-oh-one. He planted apple seeds in several areas near a place called Licking Creek. Some of the seeds were planted on land owned by a farmer named Isaac Stedden.

Chapman was careful about where he planted apple seeds. He did not leave them just anywhere. First, he would find rich, fertile land in an open area. Then, he cleared the land, carefully removing unwanted plants. Then, he planted his seeds in a straight line and built a fence around them. The fence helped to keep the young trees safe from animals. As the trees grew, he returned to repair the fence and care for the land.

STEVE EMBER: Chapman planted with thoughts about future markets for his crops. His trees often grew in land near settlements. He often sold his apple seeds to settlers. Sometimes, he gave away trees to needy settlers. When low on seeds, he returned east to Pennsylvania to get more. He got the seeds from apple presses -- machines used to make apples into a drink called apple cider.

Before long, Chapman's trees were growing in fields across Ohio. People began calling him Johnny Appleseed.

FAITH LAPIDUS: Johnny Appleseed was a small man with lots of energy. He had long dark hair. His eyes were black and bright. He never married. He lived very simply. For years, he traveled alone in the wilderness, without a gun or knife. He slept in the open air and did not wear shoes on his feet.

Some people gave him clothing as payment for his apple trees. But sometimes he wore a large cloth bag or sack as clothing. The sack had holes for his head and arms. On his head, he wore a metal container for a hat. He also used this pot for cooking his food. People said he lived this way because he wanted to. He had enough money for shelter and clothes if he had wanted to buy these things.

STEVE EMBER: Johnny Appleseed looked like someone who was poor and had no home. Yet he was a successful businessman. He used his money to improve his apple business and help other people. He was famous for his gentleness and bravery. Both settlers and native Americans liked him. Everywhere he traveled, he was welcomed. Reports from that period suggest that some native Americans believed he was "touched by God." Others called him a great medicine man.

During his travels, some families asked Johnny to join them for a meal. He would never sit down until he was sure that their children had enough to eat. His diet was as simple as his clothing. He believed that it was wrong to kill and eat any creature for food. He believed that the soil produced everything necessary for humans. He also criticized people who wasted food.

FAITH LAPIDUS: There are a number of other stories about Johnny Appleseed. Once a rattlesnake attempted to bite him while he slept. Johnny struck the creature, killing it. This was an action he said he always regretted.

Another time, he was trapped in the wilderness during a severe snowstorm. He found shelter in an old tree that had fallen to the ground. In the tree, he discovered a mother bear and her cubs. He did not interfere with the animals, and left before they knew he was there.

As the years passed, Johnny Appleseed decided to leave Ohio. He moved west into wilderness areas in what is now the state of Indiana. The woods were filled with bears, wolves and other wild animals. Yet he never hurt these creatures.

STEVE EMBER: Johnny Appleseed has sometimes been called the American Saint Francis of Assisi. Saint Francis established a Roman Catholic group that cares for the poor and the sick. Saint Francis also is remembered for his love of animals and for honoring nature.

John Chapman was a very religious man. He liked to read from the Christian holy book, the Bible. He was strongly influenced by the Swedish scientist and Christian thinker, Emanuel Swedenborg. Chapman belonged to the Church of New Jerusalem, a religious group based on Swedenborg's teachings.

FAITH LAPIDUS: In about eighteen thirty, John Chapman got some land in Fort Wayne, Indiana. There, he planted apple seedlings that grew and produced crops. He sold, traded and planted in other areas. Some reports said he also traveled to the nearby states of Kentucky and Illinois. His travels lasted more than forty years.

It is estimated that, during his lifetime, he planted enough trees to cover an area of about two hundred sixty thousand square kilometers. Over time, some adults said they remembered receiving presents from Johnny Appleseed when they were children.

STEVE EMBER: In eighteen forty-five, John Chapman became sick and developed pneumonia during a visit to Fort Wayne. He died in the home of a friend, William Worth. Chapman was seventy years old. He was buried near Fort Wayne. The marker over his burial place reads, "He lived for others."

When word of Chapman's death reached Washington, DC, Senator Sam Houston of Texas made a speech honoring him. Houston praised Chapman's work as a labor of love. He said people in the future would remember his life and work.

Strangely, stories about Johnny Appleseed continued to spread to other areas, long after John Chapman died. Some people claimed they had seen Johnny Appleseed as far south as Texas. Others were sure that he planted trees as far west as California. Even today, some people still claim they are Johnny Appleseed.

FAITH LAPIDUS: This Special English program was written by George Grow. It was produced by Lawan Davis. I'm Faith Lapidus.

STEVE EMBER: And I'm Steve Ember. Join us again next week for another PEOPLE IN AMERICA program on the Voice of America.
Related Articles
go top