Juno Gets a Close-up Look at Jupiter

Update Required To play the media you will need to either update your browser to a recent version or update your Flash plugin.
By Anne Ball
30 August, 2016

NASA, the American space agency, said the spacecraft passed about 4,200 kilometers above Jupiter's clouds. The approach was the closest the spacecraft will get to the planet before crashing into it at the end of its mission in 2018.

Early information shows NASA officials "that everything worked as planned and Juno is firing on all cylinders," said Rick Nybakken. He is Juno project manager at NASA's Jet propulsion Laboratory in Pasadena, California.

All scientific instruments on the spacecraft were turned on for the first time and pointed towards the planet as it passed Jupiter.

NASA released a picture taken as Juno sped toward the planet. The agency says more will be made public later. The new photographs will be the closest ever taken by a space probe. They also will be the first of their kind taken of the planet's north and south poles.

Scott Bolton is the top investigator of Juno from the Southwest Research Institute in San Antonio, Texas. He said, "We are in an orbit nobody has ever been in before, and these images give us a whole new perspective on this gas-giant world."

Jupiter and the three other outer planets are known as gas-giants because of their thick, gaseous atmosphere.

Bolton said, "we are getting some intriguing early data returns." Intriguing means very interesting. He said that it will take days before all the data collected during the flyby to be "downlinked," or sent back to Earth.

And he said, it will take more time to understand "what Juno and Jupiter are trying to tell us" with the data scientists are gaining.

There are seven instruments on board the spacecraft sending the information to NASA.

NASA hopes scientists will learn more about the Jupiter's beginnings, structure, and its atmosphere and magnetosphere. 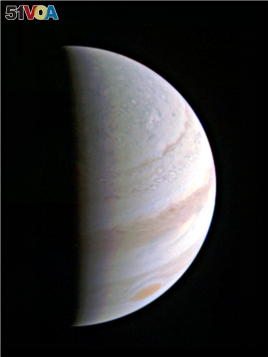 Jupiter as seen from NASA's Juno spacecraft as it approaches the giant planet.

The magnetosphere is believed to influence auroras, or glowing particles, above Jupiter's northern and southern poles.

Scientists also hope to find out more about the great red spot. It is a huge storm that has lasted for hundreds of years.

NASA launch the Juno spacecraft in August 2011, from Cape Canaveral, Florida. It began its orbit of Jupiter this year on July 4.

Anne Ball wrote this story for Learning English. Mario Ritter was the editor. We want to hear from you. Write to us in the Comments Section and visit us on 51VOA.COM.

firing on all cylinders – phrase. all its parts are working

probe – n. an instrument used for examining something

pole – n. either end of the imaginary line around which something, like Jupiter, turns—north or south pole

flyby – n. the act of flying over, or by, something

magnetosphere - n. an area of space surrounding an object in space that is dominated by the object's magnetic field