Update Required To play the media you will need to either update your browser to a recent version or update your Flash plugin.
By John Russell
17 November 2022


Letoyie Leroshi walked for five days in search of water. The rivers in Samburu County, Kenya, were dry after three years of little rain.

Then, Leroshi, a cow herder, found a small wet area of sand on a dry river bottom. He brought a group of fellow herders to the site to help dig. They hit water, and the young men broke into a happy song.

This water, known as groundwater, could be very helpful in an area dealing with a long period of too little water, or drought. 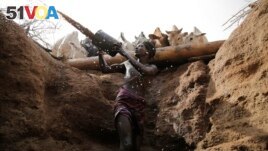 Climate change is making drought more likely. And people in East Africa and the Horn of Africa do not have the resources to tap groundwater effectively or widely.

For Leroshi and other Kenyan herders, the situation is difficult.

"We had thousands of livestock four years ago when we experienced short rains," he said. "We have lost hundreds of our cattle and are now worried that if the rains fail yet again, we will lose everything."

Leroshi and other herdsmen carry weapons to protect their animals from thieves.

"Everyone else around is also armed and ready to steal our livestock," he said.

The British nonprofit group WaterAid and the British Geological Survey examined the situation. They found that Africa has enough groundwater for most countries to get through at least five years of drought.

In the coastal city of Dar es Salaam in Tanzania in 1997 drought led people to use groundwater. The same thing happened in Cape Town, South Africa in 2017. In Ethiopia, hand-pumped wells performed better than all other water sources during a drought in 2015 and 2016.

Africa has 72 large underground areas of water, known as aquifers, that are largely unused, scientists say.

Experts also warn people about the danger of misusing groundwater.

Philip Wandera is a former director of the Kenya Wildlife Service and now with the Catholic University of Eastern Africa. He said groundwater "is not a quick-fix answer for the current drought ... if you have been poor managers of surface water, it means you are likely to do the same with groundwater."

Groundwater exploration and building projects are impossible without financing.

Agnes Kalibata, leader of the Alliance for a Green Revolution in Africa, said, "Smallholder farmers who make up most food producers on the continent," badly need irrigation technology.

"Millions of people don't have enough safe, clean water to meet their daily needs, let alone face the climate crisis," said Tim Wainwright of WaterAid in the United Kingdom. He added, "Governments, along with the private sector, should use COP27 to agree on investments in responsible groundwater use," along with clear rules for how to use it.

The people in Samburu, however, cannot wait much longer. Many herders are almost at the point of losing everything.

"I have lost 30 cows in ... two weeks and if it continues like this we will lose many more. Our women and children are also severely affected," said 30-year-old herder Lemerwas Limayo. "Drought ravages all living things."

Wanjohi Kabukuru and Brian Inganga reported on this story for the Associated Press. John Russell adapted it for VOA Learning English.

herder –n. A person how takes care of a group of animals such as cattle, sheep, etc.

well – n. a deep hole made in the ground through which water can be removed

irrigate – v. to supply (something, such as land) with water by using artificial means (such as pipes)

ravage – v. to damage or harm (something) very badly