Update Required To play the media you will need to either update your browser to a recent version or update your Flash plugin.
By Andrew Smith
16 November 2022


NASA's new moon rocket flew into space for the first time early Wednesday morning. The Space Launch System, or SLS, rocket is the most powerful ever built.

The 98-meter-tall rocket lifted off with 4 million kilograms of force and reached 160 kilometers per hour within seconds. The rocket's sound shook nearby buildings at the Kennedy Space Center in Florida. About 15,000 people watched and cheered as the rocket lit up the night sky.

No astronauts were on board the first mission of NASA's Artemis program. Artemis aims to return humans to the moon a little more than 50 years after the Apollo moon landings. Twelve astronauts walked on the moon on six Apollo missions from 1969 to 1972. 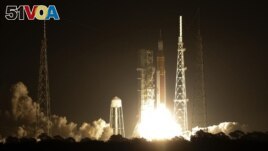 "For the Artemis generation, this is for you," launch director Charlie Blackwell-Thompson called out, referring to all those born after Apollo. She later told her team: "You have earned your place in history."

The Artemis 1 mission is set to last 25 days with three test mannequins in the Orion spacecraft. NASA has put sensors on them to measure the effects on human bodies.

Orion should reach the moon by Monday, more than 370,000 kilometers from Earth. Orion will come within 130 kilometers of the moon before going into an orbit about 64,000 kilometers farther out. This is much farther from the moon's surface than the orbits used in the Apollo missions.

The spacecraft also is set to release 10 small science satellites. One satellite is designed to map pieces of ice on the moon's south pole, where Artemis hopes to land astronauts.

NASA is aiming to send astronauts around the moon on the next mission in 2024. And the space agency hopes to land humans there as early as 2025 using a lunar lander under development from SpaceX.

One top aim of the Artemis 1 mission is to test the heat shield of Orion. The spacecraft will re-enter the Earth's atmosphere at 39,400 kilometers per hour before splashing down in the Pacific.

"There's definitely relief that we're underway," mission controller Mike Sarafin told reporters. But he added: "I personally am not going to rest well until we get safely to splashdown and recovery."

NASA has said it plans to have a woman and a person of color be among the first astronauts to land on the moon in future Artemis missions. NASA is waiting until this mission is over before introducing the astronauts who will be on the next one and those who will follow in the steps of Apollo 11′s Neil Armstrong and Buzz Aldrin. They were the first men to walk on the moon, in July of 1969.

The Artemis program costs NASA at least $37 billion. And some groups who watch government spending estimate the costs could reach $93 billion by 2025.

The program has faced many delays and costs more than planned. The SLS rocket was supposed to have made its first test launch by 2017. Test launches in August and September were cut short. Then, a strong storm and technical problems further delayed the launch by 10 weeks.

NASA hopes to establish a base on the moon and send astronauts to Mars by the late 2030s or early 2040s.

refer to -v. to mention or bring attention to something

mannequin -n. a life-size model of a human being, usually used to display clothing

pole -n. the northernmost or southernmost point on a planet

shield -n. a section of material used for protection from impacts, heat, cold, or other sources

splash -v. to make water jump by entering into it or by quickly displacing it.

introduce -v. to present or announce formally or officially or by an official reading