Update Required To play the media you will need to either update your browser to a recent version or update your Flash plugin.
By Pete Musto
23 December, 2016


The government of Kenya has ended operations of a United States-funded program aimed at educating Kenyans about voting.

The Kenyan government action comes just months before the East African country holds its next presidential election. Last week, Kenyan president Uhuru Kenyatta claimed money entering the country through the program is an attempt to influence the election.

The International Foundation for Electoral Systems (IFES) operated the $20 million program. The IFES is a non-governmental organization, an NGO, which supports free and fair elections around the world. 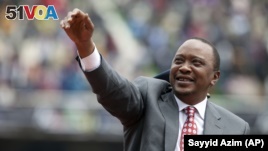 Kenyan President Uhuru Kenyatta is running for re-election next year. Last week he claimed that money coming into the country for the purposes of educating voters is being used to influence Kenyans' electoral decisions.

The NGO receives funding from the U.S. Agency for International Development and the U.S. Department of State.

Fazul Mohamed is the executive director of the NGO Coordination Board. This is the state-run corporation responsible for regulating NGOs in Kenya. Mohamed wrote in a letter to the IFES that the Board was stopping the program. The reason he gave was the IFES is not a registered NGO and all its foreign workers are operating illegally.

U.S. ambassador to Kenya Robert F. Godec said "the attempt to discredit the United States' efforts to assist Kenyans in the conduct of free, fair, peaceful and credible elections in 2017" disappointed him.

Godec added the Kenyan government and the Independent Electoral and Boundaries Commission (IEBC) had requested U.S. assistance. The IEBC is an independent Kenyan organization that supervises elections. Godec added that the program operated under their "careful oversight."

Also, the IFES is registered under a Kenyan law called the Companies Act, the ambassador said. This means the organization is legally able to run programs in the country.

In a separate statement, the U.S. and 11 other countries said they do not provide help to one candidate or political party over another. The statement said, "the Kenyan people alone have the sovereign right to choose their leaders, and we fully respect this right."

Kenyatta is running for re-election next year. He has accused opposition leader Raila Odinga of secretly working with foreign countries to remove him from power.

Kenyatta entered his office in 2013. He gained support from people who were angry over what they considered attempts by Western countries to influence Kenya's elections.

At that time, the International Criminal Court (ICC) charged Kenyatta and fellow politician William Ruto with crimes against humanity. The court in The Netherlands said the two men organized violence following the troubled elections in December 2007. Former President Mwai Kibaki claimed victory over Raila Odinga in that election.

Kenyatta and Ruto were on different sides of the conflict but became allies after the ICC named them as suspects. They then said that the ICC charges were an attempt to help Odinga.

The ICC later dropped the charges because of lack of evidence. However, the top ICC lawyer in the case said witnesses were interfered with and faced threats.

fund(ed) – v. to provide money for something

regulating – v. making rules or laws that control something

disappoint(ed) –v. to make someone unhappy by not being as good as expected or by not doing something that was hoped for or expected

oversight – n. the act or job of directing work that is being done