Update Required To play the media you will need to either update your browser to a recent version or update your Flash plugin.
By Gregory Stachel
14 November 2021


The National Symphony Orchestra of Lebanon is feeling the effects of the financial crisis in the country. The crisis has left many people in Lebanon suffering from poverty and struggling to meet simple needs.

The crisis worsened because of the COVID-19 pandemic. The August 2020 Beirut explosion also worsened the crisis. The explosion killed more than 215 people and damaged parts of the city, including the building where the orchestra meets.

As the value of Lebanese money fell, the 100 or so musicians in the orchestra watched the value of their pay fall from $3,000 to around $200.

Most foreign musicians left the orchestra and the country.

It is not clear how long the orchestra can keep going.

Lubnan Baalbaki is the conductor of the orchestra, someone who leads the musicians as they are playing.

"We used to do very big productions that would cover the entire classical repertoire. Now it's very difficult," Baalbaki said. 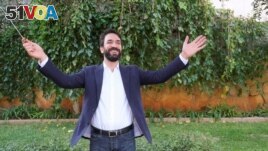 Conductor Lubnan Baalbaki stands for photo in Beirut, Lebanon on November 4, 2021. The reduced pay musicians receive has forced Baalbaki to reduce the number of shows from around 30 a year to just a few. (REUTERS/Emilie Madi)

The pay of those who remain now covers little more than the price of fuel to drive to weekly practices. This has forced Baalbaki to reduce the number of shows from around 30 a year to just a few.

This follows a wider loss of Lebanon's cultural place and activities due to the crisis and the pandemic. One of those loses is summer holiday cultural events. They were seen as a guiding light of the arts in the area. They included famous musicians and Arab celebrities.

Mona Kusta Semaan is a musician who has been with the orchestra since it was re-founded in 2000 after it closed during Lebanon's 1975-90 Civil War. She has warm memories of playing with Spanish singer Placido Domingo at the Roman ruins in Baalbeck, Lebanon in the early 2000s.

Now, she said she became emotional when she saw an orchestra on the television.

"I hope now that things get better, and Lebanon gets back on its feet, and they [foreign musicians] come back," she said. "We became a family."

Even before the crisis, the orchestra had been nearly destroyed for 10 years by Lebanon's sectarian appointment-sharing system. In Lebanon, top positions at public establishments are given to politicians who generally appoint loyalists, with little thought given to skill.

When the orchestra head Walid Gholmieh, a Greek Orthodox Christian, died in 2011, a permanent head was not found for seven years. Instead, two acting heads were appointed.

The first was a government official with no professional musical skill. The second had the skill, but was not permanently appointed because he was Catholic rather than an Orthodox Christian.

Lebanese musician Bassam Saba finally took over in 2018 after returning from the United States. But he died from COVID-19 related problems last year. Baalbaki fears it could take years before another head is appointed.

"We are hostages," Baalbaki said. "The fate of art and music in Lebanon is taken hostage in this country because of the political class..." who, he added, demand on keeping the sectarian system.

He said the musicians would keep going.

He said, "We were born in this country and this is our fate, to find solutions..." and create new possibilities."

Timour Azhari reported this story for Reuters. Gregory Stachel adapted it for VOA Learning English. Susan Shand was the editor.

orchestra – n. a group of musicians who play usually classical music together and who are led by a conductor

classical – adj. relating to music in a European tradition that includes opera and symphony and that is generally considered more serious than other kinds of music

repertoire – n. all the plays, songs, or dances that a performer or group of performers knows and can perform

celebrity – n. a person who is famous

sectarian – adj. relating to religious or political sects and the differences between them

fate – n. the things that will happen to a person or thing: the future that someone or something will have