Update Required To play the media you will need to either update your browser to a recent version or update your Flash plugin.
By Phil Dierking
27 March, 2018


Linda Brown, who was at the center of the 1954 Supreme Court case that ended racial segregation in American schools, has died. She was 76 years old.

Brown was nine years old when her father, Oliver Brown, sued the local school board in 1951. The family lived in Topeka, the capital city of the state of Kansas. They wished to send Linda to an all-white elementary school close to their home.

In the 1950s, segregation laws in many American states did not let black children and white children attend the same schools.

The Brown family's case was one of several similar cases brought together by the National Association for the Advancement of Colored People, or NAACP. They targeted Topeka's school system. The cases were combined and made it to the Supreme Court. They became known as Brown v. Board of Education of Topeka, named after Linda's father.

At the time, many schools in the United States were segregated as part of a wider system of discrimination known as the Jim Crow laws. They also enforced other forms of discrimination, such as separate public drinking fountains for black and white people, and extreme rules and taxes on black people who tried to vote. This kept many black people from voting and helped white leaders remain in power. 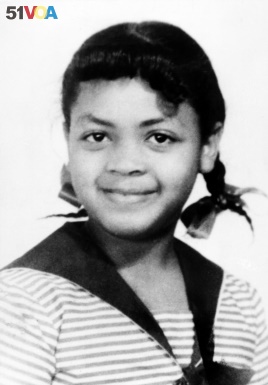 Linda Brown Smith, 9, is shown in this 1952 photo. Smith was a 3rd grader when her father started a class-action suit in 1951 of the Brown v. Board of Education of Topeka, Kansas.

An 1896 Supreme Court decision supported those laws, saying that as long as the separate services were equal, they were permissible.

In Linda Brown's case, her family wanted her to go to a school that was both better quality and closer to her home than the one she was already attending.

Judges at the lower court ruled that Topeka's system was acceptable, saying the schools were equal in their services.

But in 1954, every member of the Supreme Court voted to reject that position. The ruling remains one of the most well-known cases in the court's history.

Chief Justice Earl Warren wrote at the time, "We conclude that in the field of public education the doctrine of 'separate but equal' has no place."

He added that education may be the most important service performed by state governments, and that the conditions of a child's schooling have an important effect on their life.

After news of Brown's death, leaders around the country praised her and the importance of her case.

"Sixty-four years ago a young girl from Topeka brought a case that ended segregation in public schools in America," Kansas Governor Jeff Colyer wrote on Twitter. "Linda Brown's life reminds us that sometimes the most unlikely people can have an incredible impact and that by serving our community we can truly change the world."

Representative Bobby Scott of Virginia said of Brown, "Students all around our nation are forever in your debt for the sacrifices you made in the fight for equality in education."

Leaders noted that more work needs to be done in bringing equality to American schools.

The Congressional Black Caucus group said, "The struggle to end ‘separate but equal' continues as our schools are becoming increasingly more segregated."

Senator Dianne Feinstein of California said "we remember how far we've come in one lifetime and how far we have to go."

Following the historic case, Linda Brown's father became a minister at a church in Springfield, Missouri. He died of a heart attack in 1961. In 1988, Linda Brown and her sister, Cheryl Brown Henderson, created the Brown Foundation for Educational Equity, Excellence and Research.

Linda Brown died Sunday in Topeka. Her sister confirmed Linda's death to news media. A cause of death has not been released.

Sherrilyn Ifill is president of the NAACP Legal Defense and Education Fund. She said Monday, "the life of every American has been touched by Linda Brown. The country is indebted to her, the Brown family, and the many other families involved in the cases that successfully challenged school segregation."

VOA News reported this story. Phil Dierking adapted it for Learning English, with additional materials from the Associated Press. Ashley Thompson was the editor.

drinking fountain - n. a device in a public place that produces a stream of water for people to drink from

doctrine - n. a set of ideas or beliefs that are taught or believed to be true

indebted - adj. owing something (such as money or thanks) to someone or something

sue - v. to use a legal process by which you try to get a court of law to force a person, company, or organization that has treated you unfairly or hurt you in some way to give you something or to do something