Update Required To play the media you will need to either update your browser to a recent version or update your Flash plugin.
By Ashley Thompson
21 March, 2018


This is What's Trending...

The superhero movie Black Panther has already broken records at the box office.

Now, it has broken a record on Twitter, too. The social media company says Black Panther is officially the most-tweeted-about movie ever.

Twitter said this week that the film has been tweeted about more than 35 million times. That pushes it ahead of the earlier record-holder, Star Wars: The Force Awakens. The most recent Star Wars film, The Last Jedi, is third. 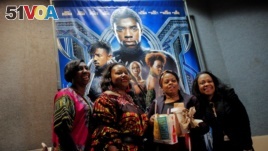 A group of women pose for a photo in front of a poster advertising the film "Black Panther" on its opening night of screenings at the AMC Magic Johnson Harlem 9 cinemas in Manhattan, New York, U.S., February 15, 2018. (REUTERS/Andrew Kelly)

Twitter said Black Panther had the most tweets in the United States, followed by Britain and Thailand.

Over the weekend, the Marvel Studios film was the top-earning movie in North America for the fifth straight weekend.

It has earned more than $607 million in the United States and almost $1.2 billion worldwide since its release in February.

In the next week, observers expect Black Panther will pass The Avengers as the highest-earning superhero film in history.

Twitter says the most commonly used hashtags about the film are #BlackPanther, #Wakanda and #WakandaForever.

Michelle Obama wrote one of the most-shared Black Panther tweets. The former first lady wrote, "Congrats to the entire #blackpanther team! Because of you, young people will finally see superheroes that look like them on the big screen."

Black Panther tells the story of an imaginary African nation called Wakanda. It is the home of the Black Panther himself, Prince T'Challa. In the film, Wakanda is a developed, highly technological country. It is both extremely modern and deeply traditional. It has never belonged to a foreign power.

The Associated Press reported this story. Ashley Thompson adapted it for Learning English with additional materials. Caty Weaver was the editor.

box office - n. used to describe how many tickets have been sold for a movie, play, etc.

entire - adj. complete or full : not lacking or leaving out any part

screen - n. a large, flat, white surface on which images or movies are shown

comic book - n. a magazine that is made up of a series of comic strips