Update Required To play the media you will need to either update your browser to a recent version or update your Flash plugin.
By John Russell
17 July, 2016


Mali has produced many world-famous artists and musicians.

An arts school in the country's capital, Bamako, is trying to use that rich cultural history to fight youth unemployment and to deter migration.

A famous artist founds the conservatory

Abdoulaye Konate is a famous Malian artist. In 2004, he founded the Balla Fasseke Koyate Conservatory. 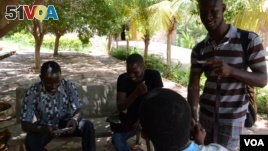 As the semester at the Balla Fasseke Kouyate Conservatory in Bamako, Mali, comes to an end, the students are busy preparing for their final exams. (K. H&#246;ije/VOA)

Konate said he wanted to offer students the chance to get a higher education without leaving Mali.

To deter migration, one strategy the school has been using is to bring the world to the students.

In addition to the school's 80 teachers, instructors from other countries regularly give classes at the school.

Cuban teachers, for example, trained Jonathan Dembele in classical guitar. Dembele graduated from the school last year. He had returned to Mali after studying abroad in Denmark and Finland.

This training made him a versatile musician, but he still prefers to play folk music.

What happens after graduation?

Some graduates find jobs at media agencies, or as teachers. Others have set up businesses. The school did a study last year and found that 60 percent of its graduates have found work.

Dembele, the guitar player, plays music at weddings and other events. He plays regularly at a hotel, too.

"It's not easy, I repeat, it's not easy to live off the music here in Mali, unless you have some branches somewhere else not in Mali, because in Mali musicians are really not well paid. You work to survive."

Arts are important for peace

Earlier this year, the conservatory hosted the Bamako Acoustik Festival. It was the first international music festival to take place in Bamako since 2012.

In that year, conflict broke out in Mali. The country is still trying to recover.

Konate, the founder of the school, says the arts are a key weapon for peace.

A new generation, he adds, that works in media and culture can help transform the country, reconcile people and build the economy.

deter – v. to cause (someone) to decide not to do something

conservatory – n. a school in which students are taught music, theater, or dance

counter – v. to do something in defense or in response to something

brain drain – n. a situation in which many educated or professional people leave a particular place or profession and move to another one that gives them better pay or living conditions

versatile – adj. able to do many different things