More Canadians Do Not Want Monarchy to Continue

Update Required To play the media you will need to either update your browser to a recent version or update your Flash plugin.
By Dan Novak
16 September 2022


Canada has deep historical ties to Britain and many Canadians generally liked Queen Elizabeth II. But a growing number of Canadians do not want the British monarch to represent them. The risks that come with constitutional reform, however, mean there is little political wish for change.

Britain colonized Canada beginning in the late 1500s. The country formally remained part of the British empire until 1982. Now it is a member of the Commonwealth of former empire countries that have the British monarch as head of state.

A public opinion study by Canada's Angus Reid Institute in April found that 51 percent of Canadians do not want the monarchy to continue as its head of state. That is up from 45 percent in January 2020. Only 26 percent said it should continue. 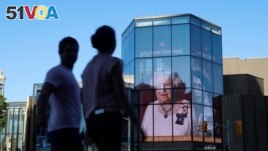 People walk by as a tribute to Queen Elizabeth appears on the National Arts Centre, after Queen Elizabeth's passing, in Ottawa, Ontario, Canada, September 8, 2022. REUTERS/Patrick Doyle

In addition, a new opinion study by the group Leger found that about 77 percent of Canadians said they feel no attachment to the British monarchy.

Many Canadians felt sorry for the royal family after the death of the queen. But many find their relationship with the British monarch to be strange.

Those from Quebec, the mostly French-speaking province, feel even less connection with Britain. In the Angus Reid study, 71 percent of people living in Quebec said they no longer see a need for the monarchy.

Twenty percent of Canada's population is new to the country with little connection to Britain. And indigenous, or native, people usually feel little warmth for the colonial power.

Niigaan Sinclair is a professor of Indigenous Studies at the University of Manitoba. In an article for the Winnipeg Free Press, he said: "Besides a whole lot of photo opportunities alongside chiefs in headdresses the reign of Queen Elizabeth will forever be marked by inaction."

Pro-monarchy Canadians and observers say the constitutional monarchy is a well-functioning democratic system. They also say changing the system would be both complex and politically risky.

"The massive constitutional effort of removing the Crown would inevitably invite many other suggestions for constitutional change. Canada went down this road in the 1980s and 1990s and the country nearly collapsed from all the competing demands," said Jonathan Malloy. He is a professor of political science at Ottawa's Carleton University.

At least seven provincial legislatures representing more than 50 percent of the population, plus parliament, must approve constitutional reforms.

Prime Minister Justin Trudeau was asked about his position on the monarchy on Tuesday. He said Canada's democracy is healthy and while he is always open to "strengthening" it, "Canadians are almost entirely preoccupied with the big issues we're facing" like climate change and the economy.

Without fully supporting the monarchy or removing the chance for debate, Trudeau said his government will work on the issues important to Canadians.

monarch — n. a person who rules a kingdom or empire

empire — n. a group of countries or regions that are controlled by one ruler or one government

opportunity — n. an activity in which several or many people are asked a question or a series of questions in order to get information about what most people think about something

reign — n. the period of time during which a king, queen, emperor, etc., is ruler of a country

inevitable — adj. sure to happen

province — n. any one of the large parts that some countries are divided into