Update Required To play the media you will need to either update your browser to a recent version or update your Flash plugin.
By Dan Friedell
12 September 2022


A new public opinion study suggests that many Americans are dissatisfied with the nation's healthcare system.

The Associated Press and the NORC research group at the University of Chicago released results of their joint investigation Monday.

Less than half of the people asked for their opinion on U.S. healthcare said they were pleased with the system. Twelve percent, said it operates extremely well. 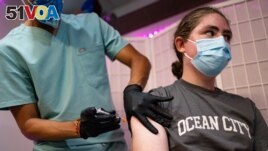 The majority expressed worry mainly about mental health care, the cost of medicine and the quality of care at nursing homes. Only six percent of those who answered said the U.S. does a good job at providing such health services.

A. Mark Fendrick runs a research center at the University of Michigan that looks at the cost of healthcare. He said the American system is extremely frustrating and that the COVID-19 crisis had worsened the situation.

Over two years after the global health crisis started affecting hospitals in the U.S., it is hard to find healthcare workers and those who are still working are suffering from what is known as "burnout." That means they are tired from working so much.

Many hospitals and clinics still have COVID-19 restrictions in place, and some Americans say they are having trouble getting good care in-person as a result.

Emmanuel Obeng-Dankwa of New York City was among those questioned in the study. He has high blood pressure, a condition that requires treatment with medicine. But, the cost is sometimes a problem for Obeng-Dankwa, especially when his housing payment is due.

"If there's no money, I prefer to skip the medication to being homeless," he said.

The new study shows that about 80 percent of people are at least a little bit concerned about getting good care when they need it.

Fifty-three percent of women said they are extremely or very concerned about obtaining quality care, compared to 42 percent of men.

Nearly 60 percent of Black and Hispanic adults said they were concerned about getting good care.

White men expressed the most confidence in U.S. healthcare of all those studied.

Racial disparities have long troubled America's health care system. They have been shown again during COVID-19, with Black and Hispanic people dying from the virus at a higher rate than whites.

While many Americans seem to agree that there are problems with healthcare, very few agree on solutions.

Compared to past years, however, about two-thirds of Americans believe government involvement could help. Some Americans want a fully public system for health insurance. Others want a mix of public and private health care.

Retired nurse Pennie Wright, of Camden, Tennessee was among those questioned by AP-NORC. She does not like the idea of a government-run health care system.

She moved to that system, known as Medicare, this year. She said she was surprised by how much she had to pay for her yearly doctor's visit. The amount included $200 for usual testing. Most of those costs had been covered by her former private health care plan.

"I feel like we have the best health care system in the world, we have a choice of where we want to go," Wright said.

They would also like the government to make a plan that would reduce the cost of medicine for everyone.

That small change would help, says New Yorker Obeng-Dankwa. Maybe he would not have to choose between paying for his home and paying for his blood-pressure medicine.

"Medication costs should be low, ... so that everyone can afford it," he said. He added: "those who are poor should be able to get all the necessary healthcare they need..."

skip –v. to not do something that is expected

prefer –v. to like something better than something else

nursing home –n. a place where sick people or those who cannot take care of themselves go to live and be taken care of

frustrating –adj. feeling angry or unsatisfied with something