Update Required To play the media you will need to either update your browser to a recent version or update your Flash plugin.
By Andrew Smith
10 September 2022

The coal plant had operated for 30 years. It produced up to one-fifth of the electricity on the island of Oahu, the most populous island in Hawaii. The state's population is nearly 1.5 million people. 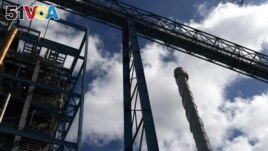 In 2020, Hawaii's Legislature passed a law banning the use of coal for energy production by the start of 2023. Hawaii has set a goal to move to 100 percent renewable energy by 2045. It was the first state to set such a goal.

Hawaii's Governor David Ige recently spoke with the Associated Press. He said: "It really is about reducing greenhouse gases." Scientists say greenhouse gases in the Earth's atmosphere trap heat and contribute to the warming of the atmosphere. Ige said the power plant emitted 1.5 million metric tons of greenhouse gases each year.

People in the state say the Hawaiian Islands have suffered the effects of climate change. These effects include the destruction of coral reefs from warming sea temperatures, sea level rise, intense storms, and drought that is increasing the risk of wildfires in the state.

However, not everyone thinks closing the power plant is a good idea. They say the state will now have to burn more oil because the coal plant is no longer operating. And oil is currently a lot more expensive than coal and causes almost as much pollution.

Hawaii has the highest energy and living costs in the United States. Hawaii Electric Company estimated that ending the use of coal and the additional cost of oil will result in a seven percent increase in electricity bills for consumers. It later lowered the estimate to four percent based on reports of lower oil prices.

Democratic Party state Senator Glenn Wakai said Hawaii was changing "from the cheapest fossil fuel to the most expensive fossil fuel." He also said, "if you pay an electricity bill, this is a disastrous day for you."

Hawaii is joining 10 other states that do not produce electricity from coal. That information comes from Global Energy Monitor, an organization that promotes the use of renewable energy around the world.

In 2001, there were about 1,100 coal-burning plants in the United States. More than half have stopped operating since then, with most switching to natural gas.

Hawaii already gets about 40 percent of its power from sustainable sources including wind, solar, hydroelectric and geothermal energy. But oil provides more than half of its electricity.

Kurt Fevella is a State Senator from the Republican Party. He suggested that Hawaiian Electric Company and other energy companies should pay some of the additional cost of changing to renewable energy.

Hawaiian Electric Company is the state's only provider of electricity. It said it cannot do very much to change the prices that consumers pay because it does not set prices. Jim Kelly, an official with the company, said, "We don't make any money on the fuels that we use to generate electricity."

AES Corporation is the operator of Hawaii's last coal plant. Leonardo Moreno, president of AES Corporation's clean energy division, said, "Renewables are getting cheaper by the day." He said that he can see a future where renewable energy is low-cost and abundant.

Scott Glenn is Hawaii's Chief Energy Officer. He said that coal is getting more costly. He said Hawaii gets its coal from clearcut rainforests in Indonesia.

Glenn also said, "We are already feeling the effects of climate change." He said it is not fair to ask other states or countries to help with climate change if Hawaii does not also help. "If we don't, we drown," he said.

plant –n. a building or factory where something is made

contribute to –v. to share in bringing a result; to be partly responsible for the result

emit -v. to release a substance or energy into the environment, such as heat, gas, sound and the like.

drought -n. a long period of time without rain, often resulting in a lack of water.

consumers -n. those who use and/or buy materials and services

promote -v. to encourage or advocate for

switch -v. to change from doing or using one thing to another thing

sustainable -adj. able to be used or renewed for an indefinite period of time into the future

generate –v. to produce; to create

clearcut -adj. in forests, areas where all of the trees and vegetation have been cut down and removed