Update Required To play the media you will need to either update your browser to a recent version or update your Flash plugin.
By Caty Weaver
09 September 2022


Bells rang across Britain on Friday and mourners gathered in London and other places to honor Queen Elizabeth II. She died Thursday at the age of 96, after 70 years as the country's ruler.

Around the world, her exceptional reign is being remembered, celebrated, and debated. Many are also considering what the future will look like with the new king, Charles III.

The British monarchy's rules state that "a new sovereign succeeds to the throne as soon as his or her predecessor dies." So, as Elizabeth's first son, Charles became king immediately upon her death. 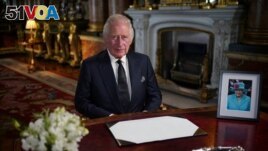 King Charles III delivers a speech to the nation and the Commonwealth from Buckingham Palace, London, Friday September 9, 2022. Yui Mok/Pool via REUTERS

Charles has spent much of his 73 years preparing to be king. On his first full day of duties, the King met in London with Prime Minister Liz Truss. Queen Elizabeth had officially appointed Truss earlier in the week.

Charles arrived at Buckingham Palace, the monarch's London home, to cheers from crowds nearby. His wife Camilla, now queen consort, was by his side. Shouts of "Well done, Charlie!" were heard. The crowd began singing the national song, God Save the King. One woman gave Charles a kiss on the cheek.

Later Friday, Charles gave his first speech to the nation as king.

He said he feels "profound sorrow" over the death of his mother and promised to carry on her "lifelong service" to the nation. His speech was broadcast on television and streamed at St. Paul's Cathedral, where some 2,000 people were attending a service of remembrance for the queen.

Mourners at the service included Truss and members of her government.

The new king is expected to travel around the country in the coming days. The queen's body will be brought to London, to lie in state before a funeral at Westminster Abbey, expected around September 19.

As prince, Charles lost some public support when he and the late Princess Diana ended their marriage. Some also say he stretched the rules that bar the monarchy from intervening in public affairs. He entered into public debate on issues such as environmental protection and preservation of historic buildings.

"He now finds himself in, if you like, the autumn of his life, having to think carefully about how he projects his image as a public figure," said historian Ed Owens. "He's nowhere near as popular as his mother, " Owens said.

Charles' rise to the throne is likely to fuel debate about the future of Britain's monarchy. Some see the monarchy as a sign of national unity and others as an outdated system that should end.

Charles, who will be the head of state for Britain and 14 other countries, including Australia, Canada, New Zealand and Papua New Guinea, has defended his past actions. He has said his interest and involvement in public issues was aimed at "motivating" people, or moving them to take action.

Charles also said, however, that as king he would not be able to interfere in politics because a sovereign's duties are different from those of the Prince of Wales.

He has said he plans to reduce costs for the monarchy and better represent modern Britain.

His mother was Britain's longest-ruling monarch. She represented dependability during many crises that affected her, the monarchy and the country.

Whether Charles will be as loved by his subjects as was Queen Elizabeth II remains to be seen. For now, Britain will continue to mourn her passing.

Caty Weaver adapted this story from reports by The Associated Press.

reign –n. the rule of a king, queen or emperor over a country

sovereign –n. a king or queen

monarch –n. a person who rules a kingdom or an empire

sorrow –n. a feeling of sadness or grief

figure –n. a person who has some kind of position are is considered in a certain way