Update Required To play the media you will need to either update your browser to a recent version or update your Flash plugin.
By Anna Matteo
07 June 2021


A professor from a Barcelona art school held a protest recently at a museum dedicated to Pablo Picasso. She told Reuters news agency that she wants to show the Spanish painter's sometimes hurtful behavior towards women.

Maria Llopis and seven of her female students appeared at the Picasso Museum wearing t-shirts that read "Picasso, women abuser." Others wore t-shirts with the name of Dora Maar.

Maar was a French artist who is believed to have suffered abuse by Picasso during their relationship in the 1930s and 1940s.

The protest follows the worldwide debate on the treatment of some women by some men, led by the #MeToo movement. Many in this movement want to show poor treatment of women of dead individuals as well as living ones.

Llopis, a 45-year-old professor, said she only wanted to make a restrained protest. She said the museum was not discussing Picasso's treatment of women and his female relationships. She added that this is especially true of Dora Maar and her troubled life after their break-up.

"It was not an attack on Picasso," she said. "I don't believe at all in cancel culture. I believe in the truth, in not hiding things." 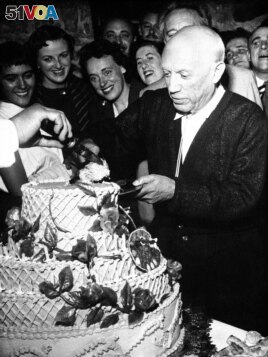 Pablo Picasso, famed Spanish painter, accepts first piece of 67-pound birthday cake as he celebrates his 75th birthday, with a birthday party at Vallauris in southern France on Oct. 24, 1956.

The museum director, Emmanuel Guigon, said he respected the protest. He added that the debates that result from the protests are important. He said that a talk next autumn on Picasso's relationship with women and exhibitions on the issue were already planned.

"We cannot look at Picasso's work and life as we did 20, 40 or 50 years ago," he said. "It can always be looked (at) with new and critical eyes, but we will not remove Picasso's work from art history."

He said that Picasso was "very machista" – a word that translates as a "male chauvinist" in English. However, he did not know of cases of physical abuse.

Picasso lived from 1881 to 1973 and had many relationships throughout his life. In a 2001 book, his granddaughter Marina Picasso wrote that he would get rid of women after he used them for his artistic purposes.

Art historian Victoria Combalia wrote a story of Maar's life. She has accused Llopis' protest of being meaningless. But she said she supports putting information in museums about the stories behind some of his paintings.

Asked about that possibility, museum director Guigon said there are no plans to do that. He added that it was more important to hold debates.

There is evidence that at least once Picasso very likely punched Maar on her eye and that he could be seen as abusive to women in general, Combalia said.

Joan Faus reported this story for Reuters. Anna Matteo adapted it for VOA Learning English. Hai Do was the editor.

cancel culture -n. the practice or tendency of engaging in mass canceling as a way of expressing disapproval and exerting social pressure

exhibition -n. a public showing (as of works of art, objects of manufacture, or athletic skill)

male chauvinist -n. a belief that men are superior to women