Update Required To play the media you will need to either update your browser to a recent version or update your Flash plugin.
By Susan Shand
27 January, 2018

Last August, Rohingya militant attacks on the police caused a military response that sent more than 650,000 Rohingya fleeing into Bangladesh.

Myanmar and Bangladesh have since agreed on a plan to send refugees from Myanmar back to the country within the next two years. And the leader of Myanmar is looking for private investment to rebuild Rakhine State.

However, the return of refugees has stopped. Rohingya leaders have demanded that community land be returned and human rights violations be investigated. They also want the opportunity to become citizens of Myanmar.

In an e-mailed statement to VOA, the United Nations High Commissioner for Refugees said, "conditions in Rakhine State are not yet fully conducive to the safe...return of refugees."

Myanmar's civilian government, led by Aung San Suu Kyi's National League for Democracy (NLD), is constitutionally prevented from questioning the army. It has, however, tried to take control in other ways.

The heads of Eden, KBZ, and Asia World were once under Western sanctions because of their ties to the previous government, a military junta. During her years of house arrest, Aung San Suu Kyi criticized them as military "cronies."

In an October 2016 event, she reminded them of past misdeeds but asked for, "those who have previously worked for their own self-interest work for others in the future."

The same business leaders who made millions of dollars during military rule now support the Union Enterprise for Humanitarian Assistance, Resettlement and Development in Rakhine, or UEHRD.

It was formed in October with a $13.5 million donation from business leaders.

Nyo Myint is a senior managing director of KBZ Group. He told VOA some of the $2.2 million donated from his company would be spent on a new fence across the border with Bangladesh. He said this would benefit "both countries" by stopping illegal migration.

Other support has been more direct. Chit Khine, the Eden Group chairman, told VOA over the phone that his company is building structures in Nga Khu Ya, one of two areas near the border where refugees will be returned. The Eden Group built large parts of Myanmar's new capital city in Naypyidaw under military rule. 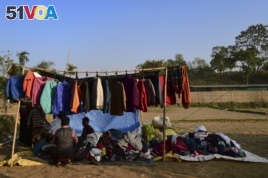 Gerard McCarthy works at the Myanmar Research Center of the Australian National University. He told VOA that asking for the support of businesses for national causes is not a change from NLD values, which believe that "capitalists can be moral as long as they contribute."

The government in October restarted an economic zone in Maungdaw in northern Rakhine State, by signing a deal with a group of local and Yangon-based firms.

Vicky Bowman, director of the Myanmar Center for Responsible Business, told VOA via email that while humanitarian needs should come first, there was "a need for public investment in infrastructure" to fight poverty in Rakhine State.

However, there are risks. Bowman said that there could be local anger that businesses from outside of Rakhine have more opportunity at a time of strong Rakhine nationalism.

Ben Dunant reported this story for VOA. Susan Shand adapted it for Learning English. Hai Do was the editor.

sanction – n. an action that is taken or an order that is given to force a country to obey international laws by limiting or stopping trade with that country

junta – n. a military group controlling a government after taking control of it by force

crony - n. a close associate in a corrupt enterprise

infrastructure – n. the bridges, roads, and buildings of a society