Update Required To play the media you will need to either update your browser to a recent version or update your Flash plugin.
By Jonathan Evans
14 June 2021


The trial of Myanmar's ousted leader Aung San Suu Kyi began on Monday. She faces several corruption-related charges. Many observers say the trial is an attempt by the country's military to remove her as a political force and strengthen its power.

The rights organization Human Rights Watch said the charges being heard in a special court in Myanmar's capital are "bogus and politically motivated." 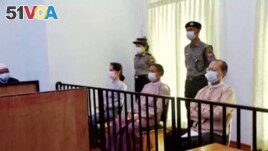 Phil Robertson is the deputy Asia director for Human Rights Watch. He said the trial is aimed at preventing Suu Kyi and her National League for Democracy party from becoming "a force that can challenge military rule in the future."

The military seized power on February 1 before the new lawmakers could be seated. Soon after, they arrested Suu Kyi, along with President Win Myint and other members of her government and ruling party.

The military claimed the coup was necessary because the government failed to correctly investigate accusations of voting fraud. Since then, the military has said it has found evidence of fraud. But the independent Asian Network for Free Elections and other organizations dispute that claim. Military officials have threatened to break up the National League for Democracy. And if Suu Kyi is found guilty on any charges, she could be banned from politics.

The military government has claimed it will hold new elections within the next year or two. But the country's military has a long history of promising elections and then not following through. The military ruled Myanmar for 50 years after a coup in 1962. Suu Kyi was kept under house arrest for 15 years after a failed 1988 uprising.

The military's latest takeover set off nationwide protests that continue despite clashes that have killed hundreds of people. Street demonstrations have become smaller recently. But the military now faces armed resistance by some opponents in both cities and rural areas.

Suu Kyi's lawyers spoke about her charges Sunday. They said she has been charged with illegally importing "walkie-talkie" radios and using the devices without registration. She is also charged with spreading information that could cause public alarm or unrest. In addition, Suu Kyi faces two counts of violating the Natural Disaster Management Law for supposedly breaking pandemic restrictions during the 2020 election campaign.

"All these charges should be dropped, resulting in her immediate and unconditional release," said Human Rights Watch's Robertson. But he added that "there is little likelihood [Suu Kyi] will receive a fair trial."

Government lawyers will have until June 28 to finish their presentation. Then, Suu Kyi's defense team will have until July 26 to present its case, the team's senior member said last week. Court hearings are to be held on Monday and Tuesday each week.

Suu Kyi faced her first charge just days after the February coup. However, she was not permitted to meet with her lawyers face-to-face until a pre-trial hearing on May 24. She was also able to briefly meet with them one other time before seeing them in court Monday.

coup – n. the violent overthrow or alteration of an existing government by a small group

bogus – adj. not real or genuine : fake or false

motivated – adj. provided with a motive having an incentive or a strong desire to do well or succeed in some pursuit

challenge – v. to question the action or authority of someone

fraud – n. the crime of using dishonest methods to take something valuable from another person; trickery; deceit

bribery – n. the crime of giving or taking a bribe