NASA Shares First Evidence of Planet Outside Our Galaxy

Update Required To play the media you will need to either update your browser to a recent version or update your Flash plugin.
By Bryan Lynn
31 October 2021


Astronomers say they have found evidence for the first time of a planet orbiting a star outside our Milky Way galaxy.

The evidence was observed by a telescope operated by the American space agency NASA. It is called the Chandra X-ray Observatory. NASA says the orbiting observatory is the world's most powerful X-ray telescope.

NASA recently announced that the observatory might have discovered a new planet in the galaxy known as Messier 51 or M51. The galaxy is popularly known as the "Whirlpool" galaxy. The research recently appeared in the publication Nature Astronomy.

The possible planet is considered an exoplanet. These are planets that orbit a star outside of our own solar system. 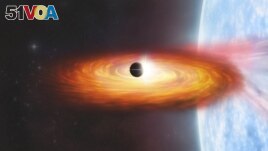 An artist's rendering of the first planet candidate identified outside of our Milky Way galaxy is pictured next the M51 galaxy. (Credits: X-ray: NASA/CXC/SAO/R. DiStefano, et al.; Optical: NASA/ESA/STScI/Grendler)

But all of these have been observed in the Milky Way galaxy. And NASA says almost all of them are "less than about 3,000 light-years from Earth." Scientists estimate that an exoplanet in the M51 galaxy would be much farther, about 28 million light-years away.

Exoplanets are hard for telescopes to identify. This is because the bright light of the stars they orbit can hide them. The identification process involves searching for drops in the light levels of stars. Such drops could be caused by a planet passing in front of a star.

This method has been used in past observations by NASA telescopes to confirm the presence of planets crossing in front of stars. These movements -- of planets partly blocking light from stars -- are called "transits."

NASA's latest finding is based on a transit detected by the Chandra X-ray Observatory. But unlike other NASA telescopes which search for drops in observable light, Chandra is designed to detect X-rays.

The observatory "searched for drops in the brightness of X-rays received from X-ray bright binaries," NASA said in a statement. These binaries are defined as bright systems that usually contain a neutron star or black hole pulling in gas from a closely orbiting star. A neutron star is the unimaginably dense result of a supergiant star that has collapsed on itself.

The researchers said the activity of binaries causes the material near the neutron star or black hole to become superheated and glow in X-rays. However, the area producing the X-rays is small. It is so small that a planet passing in front of it could block most or all the X-rays, they added.

This method could permit exoplanets "to be detected at much greater distances" than other light-searching systems that depend on optical telescopes, the NASA statement said.

Rosanne Di Stefano is an astrophysicist at the Center for Astrophysics, Harvard & Smithsonian in Cambridge, Massachusetts. She said in a statement that the research team is seeking "to open up a whole new arena for finding other worlds by searching for planet candidates at X-ray wavelengths."

Such methods could be used in the future to discover other new planets in distant galaxies, Di Stefano added.

The researchers say more data will be needed to confirm the observation as an actual "extragalactic exoplanet." They say one problem is that the planet candidate has a large orbit. This means it is not expected to pass in front of its binary partner for at least 70 years, blocking any confirmation attempts anytime soon.

However, one co-writer of the study said the team is very confident with its findings. "We know we are making an exciting and bold claim, so we expect that other astronomers will look at it very carefully," said Julia Berndtsson of Princeton University in New Jersey. She added: "We think we have a strong argument, and this process is how science works."

Bryan Lynn wrote this story for VOA Learning English, based on reports from NASA and Nature Astronomy. Mario Ritter, Jr. was the editor.

optical –adj. relating to or using light, especially light that can be seen with the human eye

arena – n. a place of scene of activity, debate or conflict

confident – adj. sure about your ability to do things well