Update Required To play the media you will need to either update your browser to a recent version or update your Flash plugin.
By VOA
28 September, 2015

NASA has found lines of "hydrated" salt minerals on Mars. Scientists say these minerals would require liquid water to be created. And where there's liquid water, they say, there could be life. 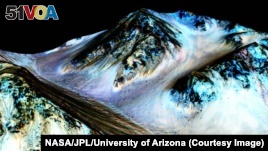 These dark, narrow, 100-meter-long streaks called "recurring slope lineae" flowing downhill on Mars are thought to have been formed by flowing water. The image, taken with a special camera, uses false colors to show detail better.

Jim Green is the director of planetary science at NASA Headquarters. He said during a news conference that "today, we are revolutionizing our understanding of this planet."

Doug McCuistion is the former head of NASA's Mars program. He told the Boston Herald that "if they are announcing that they have found easily accessible, freely flowing liquid water under the surface ... that has massive implications both for the potential for life on that planet and sustainability of humans."

NASA has found evidence of water on Mars in the past. In March, NASA said there was once more water on Mars than in Earth's Arctic Ocean. They say more than four billion years ago, Mars was covered with water 137 meters deep. But nearly all of it has since evaporated into space.

Jonathan Evans adapted this story from a VOA News report. Kathleen Struck was the editor.

hydrated – adj. – relating to something formed when water combines with another substance