Update Required To play the media you will need to either update your browser to a recent version or update your Flash plugin.
By John Russell
12 August 2022


Art institutions in the United States are increasingly looking to Native American communities to organize public showings, or exhibitions, of ancestral art and artifacts.

Native American voices and artistry are at the center of one new traveling exhibition. Grounded in Clay opened on July 31 at the Museum of Indian Arts and Culture in Santa Fe. It travels next year to the Metropolitan Museum of Art in New York, before taking more stops at the Museum of Fine Arts in Houston and the Saint Louis Art Museum.

Grounded in Clay explores pottery from the Pueblo Indian area of the American Southwest. 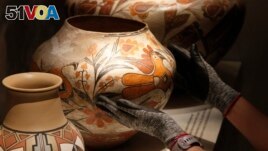 Finishing touches are made on a community-curated exhibition of Native American pottery from the Pueblo Indian region of the U.S. Southwest on July 28, 2022, at the Museum of Indian Arts and Culture in Santa Fe, N.M. (AP Photo/Morgan Lee)

In Pueblo pottery traditions, artists use their hands to form clay into many shapes and sizes. Then they fire it inside a very hot stove called a kiln. The process permanently hardens the clay.

60 Native American artists, museum professionals, storytellers and political leaders worked together to develop the public showing. Each picked a few of their favorite pieces from collections in New Mexico and New York. Personal statements and sometimes poetry appear with the clay works.

Tara Gatewood — a broadcaster from the daily talk radio show "Native American Calling" — was among the organizers of the exhibition.

Gatewood discussed the mystery around the works, pointing to one ancestral jar from around 1,000 years ago. Its maker is unknown.

"Is your blood mine?" she said. "Where else beyond the surface of this vessel do your fingerprints appear on the blueprint of my own life?"

The exhibit includes about 110 pottery works. The Indian Arts Research Center at the School of Advanced Research in Santa Fe loaned most of the pieces.

The center has long worked to change how Native American art and artifacts are cared for, shown and understood.

The organizers of Grounded in Clay come from the 19 Native American communities of New Mexico, the West Texas community of Ysleta del Sur and the Hopi tribe of Arizona.

Brian Vallo, governor of Acoma Pueblo from 2019-21, chose two pieces for the new traveling exhibition. Both of the pieces have ties to Acoma, known as a "sky city" for its position on high ground.

Vallo found the pieces in the New York-based Vilcek Foundation

He says something beautiful and new awaits experienced museum-goers and other curious visitors.

"It's Native voices, and it's even the items that are selected by Native people themselves, not the institutions," he said.

Vallo added that people who go to the showing will "appreciate that these cultures survived and are thriving, and the creative spirit of our people is very much alive."

Morgan Lee reported on this story for the Associated Press. John Russell adapted it for Learning English.

artifact – n. an object (such as a tool or weapon) that was made by people in the past

clay – n. a heavy, sticky material from the earth that is made into different shapes and that becomes hard when it is baked or dried

pottery – n. objects (such as bowls, plates, etc.) that are made out of clay usually by hand and then baked at high temperatures so that they become hard

thrive – v. to grow or develop successfully : to flourish or succeed