Update Required To play the media you will need to either update your browser to a recent version or update your Flash plugin.
By Dan Novak
05 August 2022


A new video game that includes a brave cat is popular with cat lovers. Some of them are using the game to raise money for real cats.

The game was released last month. It is called "Stray." A stray animal is one without a home. Many stray cats and dogs live on city streets.

Thanks to online fundraising services, gamers are playing "Stray" live for audiences to raise money for animal shelters and other cat-connected organizations. 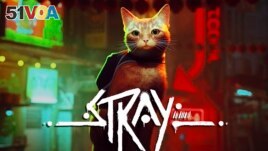 Annapurna Interactive, the game's creator, publicized "Stray" by offering two cat rescue and adoption agencies copies of the game to give away.

Livestreaming game play for charity is not new. But the quick popularity of "Stray" is a bit unusual. It was the fourth most watched game on the day it was first shown on Twitch, the video game streaming site.

Viewers watch as players send the game's cat through a city to solve problems and escape enemies. The cat in the game does all this while doing usual cat activities, like scratching, jumping or hitting things off tables.

About 80 percent of the game's creative team are "cat owners and cat lovers," the game's producers said.

"I certainly hope that maybe some people will be inspired to help actual strays in real life," said Swann Martin-Raget. He is a game producer of Stray and works at the BlueTwelve gaming studio in France.

Annapurna Interactive contacted the Nebraska Humane Society to discuss a partnership before the game's launch on July 19. The humane society jumped at the chance, marketing specialist Brendan Gepson said.

"The whole game and the whole culture around the game, it's all about a love of cats," Gepson said. "It meshed really well with the shelter and our mission."

The shelter received four copies of the game to give away. People donated $5 for a chance to win one of the games. In one week, the shelter raised $7,000, Gepson said.

Most of the 550 donors were new to the shelter, including people from Germany and Malta.

Jeff Legaspi is Annapurna Interactive's marketing director. He said it made sense for the game's launch to do something "impactful," or making a powerful influence. He added that he hopes the game will "bring more awareness to adopting and not shopping for a new pet."

The game is available on PlayStation and the Steam online game platform. Steam monitor SteamDB said "Stray" has been the number-one purchased game for the past two weeks.

Annapurna did not release sales numbers or download numbers for the game.

charity — n. the act of giving money, food, or other kinds of help to people who are poor, sick, etc.

viewer — n. a person who sees or looks at something

inspire — v. to make want to do something ; to give an idea about what to do or create

mesh — v. to fit or work together successfully