Update Required To play the media you will need to either update your browser to a recent version or update your Flash plugin.
By John Russell
07 January 2022


A new comic book is celebrating the life of actress Betty White.

White, who would have turned 100 on January 17, had a career of more than 80 years and became America's favorite older actress. She died at home last week in her sleep, her agent said.

From her early days in television to her famous part on "The Golden Girls" and her social media fame, the 30-page comic book by TidalWave Productions follows White's Hollywood journey. The book will be available both on computers and in print. 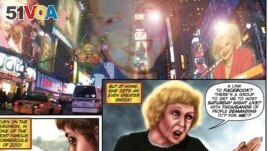 A page from a biography comic book tracing the life of Betty White is seen in this handout image obtained by Reuters on January 4, 2022. (TidalWave Productions/Handout via REUTERS)

White won best-supporting actress awards for her part on "The Mary Tyler Moore Show" in 1975 and 1976.

She won another Emmy in 1986 for "The Golden Girls," a show about four older women living together in Miami. The show explored the issues of an age group rarely shown on American television.

White also was nominated for an Emmy six other times for her acting in "The Golden Girls." She played the part of Rose Nylund, a kind person from America's Midwest whose husband had died. "The Golden Girls" ran from 1985 to 1992 and was one of the top-rated television shows of its time.

White, who had no children, worked for animal causes. She once turned down a part in the movie "As Good as It Gets" because of a scene in which a dog was thrown in a waste chute.

Alicia Powell reported on this story for Reuters. John Russell adapted it for Learning English. Susan Shand was the editor.

comic book – n. a magazine that is made up of a series of comic strips

scene – n. a part of a play, movie, story, etc., in which a particular action or activity occurs

chute – n. a narrow tube or passage that things and people go down or through