Update Required To play the media you will need to either update your browser to a recent version or update your Flash plugin.
By VOA
18 October, 2012

This year, the Nobel Prize for economics recognizes two Americans for their work. Staffan Normark, Permanent Secretary of the Royal Swedish Academy of Sciences, made the announcement Monday.

"The Royal Swedish Academy of Sciences has decided to award the Sveriges Riksbank Prize in Economic Sciences in Memory of Alfred Nobel 2012 to Professor Alvin Roth at Harvard University, Cambridge, Massachusetts, USA...And to Professor Lloyd S. Shapley at University of California Los Angeles." 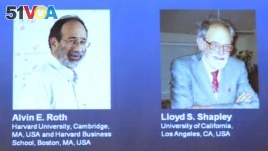 Pictures of U.S. economists Alvin Roth and Lloyd Shapley, who won the 2012 Nobel prize for economics, are seen projected at the Swedish Royal Academy of Sciences in Stockholm, Sweden, October 15, 2012.
"For the theory of stable allocation and the practice of market design."

The Nobel Prize in economics is often awarded for discoveries in how markets work or how market actors behave. But Alvin Roth and Lloyd Shapley thought of ways to design markets.

Per Krusell of the Royal Swedish Academy of Sciences explained it this way.

"This year's prize in economic sciences is about economic engineering. It's about how to practically design certain markets so that they work well."

Lloyd Shapley worked with David Gale on a research project in the 1960s. It dealt with how to match up ten men and ten women in strong, successful marriages.

The two researchers developed an algorithm or mathematical formula. It provided a model suggesting a way that all those couples could be matched best.

The algorithm did not do very much to solve anyone's marriage issues. But it did suggest ways to understand some kinds of markets better.

David Gale died a few years ago. Alvin Roth built on the work, although he and Lloyd Shapley did not work together. Mr. Roth recognized the value of the Gale-Shapley findings. And he applied it to real-life markets.

These included markets where the normal supply and demand relationship does not work, and where payment is not used. These markets require matching market actors such as organ donors and recipients, or students with public schools. Mr. Roth's work was also used to match new doctors with hospitals.

The Royal Swedish Academy called the work of Mr. Roth and Mr. Shapley an outstanding example of economic engineering.

Alvin Roth said market design is a new field and the prize may draw more attention to it.

"You know, my colleagues and I work in an area that we're calling 'market design', which is sort of a newish area of economics and I'm sure that when I get to class this morning my students will pay more attention."

Alvin Roth and Lloyd Shapley will share the prize, which is worth over one million dollars.