Update Required To play the media you will need to either update your browser to a recent version or update your Flash plugin.
By Bryan Lynn
21 September, 2017


North Korea is preparring to observe the anniversary of the death of Kim Jong Un's grandmother as world leaders increase criticism of country's missile and nuclear test program.

Kim Jong Sook was the grandmother of the North Korean leader. 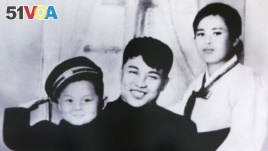 Major observances are planned to mark the September 22 anniversary, according to sources who spoke to Radio Free Asia.

North Korea began to emphasize the role of Kim Jong Sook after last year's 7th Congress of the ruling Korean Workers' Party, a source said. At one event on August 15, she was called "the Mother of the Revolution, the source added.

Flowers from Kim Jong Un will be placed on a statue of Kim Jong Sook at her birthplace in North Hamgyong province, said another source.

The celebrations will be a way for officials to emphasize Kim Jong Un's direct blood ties to North Korea's founding couple.

According to another source in North Hamgyong province, the observances under former leader Kim Jong Il were handled more quietly. "But this has become a more important event now that Kim Jong Un is in charge," the source said.

The observances come as the international community attempts to put more pressure on North Korea to end its nuclear weapons program.

Earlier this week, U.S. President Donald Trump used powerful language to warn North Korea. In a speech to the United Nations General Assembly Tuesday, Trump said that if the U.S. is threatened, in his words, "We will have no choice but to totally destroy North Korea." He also called Kim "rocket man," saying he seemed to be on "a suicide mission."

On Thursday, Trump signed an executive order permitting the U.S. to sanction individual companies and institutions that do business with North Korea. He announced the action during a working lunch with Japanese Prime Minister Shinzo Abe and South Korean President Moon Jae-in.

Speaking to the U.N. General Assembly Thursday, Moon said he approved of sanctions being placed on North Korea to help resolve the nuclear conflict. But he urged North Korea to agree to hold talks on the issue to prevent a possible conflict.

Although South Korea is backing sanctions against North Korea, it also decided to move forward with a planned aid package worth $8 million to its communist neighbor.

Sunghui Moon reported this story for Radio Free Asia's Korean Service. Bryan Lynn adapted it for VOA Learning English, with additional material from the Associated Press. Hai Do was the editor.

sanction – n. action taken to make a country obey a rule or law

emphasize – v. show that something is important or needs special attention