Update Required To play the media you will need to either update your browser to a recent version or update your Flash plugin.
By VOA
15 July, 2015


The American president Wednesday defended the historic agreement reached with Iran Tuesday. Barack Obama said the deal represents the world's best way to ensure that Iran does not get a nuclear weapon.

The agreement, in his words, "cuts off every single path" for Iran to build a nuclear bomb. And, he said that makes the United States and the world safer.

Also Wednesday, the United States proposed a United Nations measure to end all international restrictions linked to Iran's nuclear program. However, a U.N. ban on trading arms with Iran would remain in place for five years. A ban on ballistic missiles trade would continue for eight years. 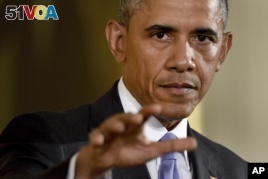 The protest took place near the Parliament building. Lawmakers inside were debating terms for a new debt agreement from Greece's European lenders.

The violent activists ended otherwise peaceful demonstrations. Thousands of people had marched through Athens to protest the latest austerity measures.

Greek lawmakers are to vote on the measures early Thursday.

A German court has sentenced a 94-year-old former Nazi officer to four years in prison. Oskar Groening was found guilty of involvement in the murders of hundreds of thousands of people. The crimes took place at the Auschwitz death camp in Poland over a two month period.

Oskar Groening admitted "moral guilt" at the start of the trial. He worked in the death camp for several years, collecting and counting the belongings of the Jews as they arrived. The trial dealt only with a two month period in 1944 of his time at the camp.

The Switzerland-based team attempting to fly a solar-powered plane around the world says the flight has been delayed until next April because of damage to its batteries.

The team says the batteries on the Solar Impulse 2 overheated during its five-day flight from Nagoya, Japan to Honolulu, Hawaii on June 30.

Pilot Andre Borschberg landed the Solar Impulse 2 near Honolulu on July 3, after traveling a record-breaking 118 hours across the Pacific Ocean. It was the most dangerous part of the plane's 35,000-kilometer trip around the world because there was no place to land in an emergency.