Update Required To play the media you will need to either update your browser to a recent version or update your Flash plugin.
By VOA
08 July, 2015


American and Iranian officials met for three hours Wednesday in Vienna, Austria, to try to reach an agreement on Iran's nuclear program. On Tuesday, international leaders extended the time limit to reach a final deal. 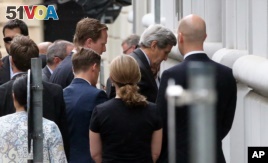 U.S. Secretary of State John Kerry and Iranian Foreign Minister Mohammad Javad Zarif are also in Vienna, but it is still unknown if they will meet.

Greece asked its European neighbors for a new three-year bailout Wednesday.  It promised to "immediately implement" tax and spending reforms.

European leaders set Saturday as the final deadline for reaching an agreement that will keep Greece in the euro zone.

Earlier Wednesday, a computer problem forced United Airlines to ground all of its flights. Flights resumed after it was repaired.

implement – v. to begin to do or use (something, such as a plan)